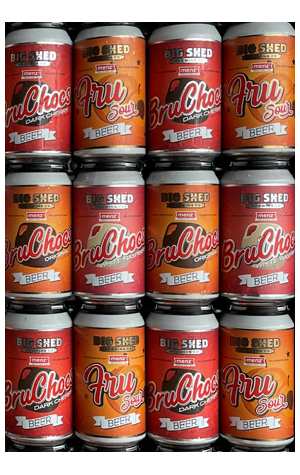 When it comes to cult icons in South Australia, we have quite a few: the Malls Balls, frog cakes and Stobie poles to name just three. So, when two top SA companies team up, the people of SA tend to go crazy. Big Shed and Robert Menz have been working together for a while; now, ahead of the ten years of FruChocs Appreciation Day, they decided to step things up a notch. Instead of just rereleasing the original BruChocs stout, they went all out and created four different BruChocs-inspired beers alongside two new Menz FruChocs products.

The BruChocs Original and Dark Cherry beers are built upon a stout base and, along with the FruSour, contain Fru-mince – the apricot and peach heart of the sweet treat. The fourth beer takes the form of a white chocolate raspberry oat cream IPA.

The BruChocs Original is a 6 percent ABV sweet stout with a nose including milk chocolate, hazelnut and the aforementioned peach and apricot. To taste, it moves from the sweet, milky chocolate begins upfront before a tart peach and apricot combo chimes in, with a tartness that lingers late on the tongue.

FruSour uses the tartness of the fruit in a sour beer to drop the PH in a golden-coloured beer in which fleshy peach and dried apricots somehow combine to create the impression of a little mango. It's a juicy, refreshing 5.9 percent ABV sour with a touch of salinity right at the end.

The 5.7 percent ABV Dark Cherry BruChocs pours a dark brown with flickers of red cherry. The aromas combine perfectly to form Cherry Ripe like aromas: huge cherry with dark chocolate, a little milk, vanilla and even a splash of coconut. The cherry dominates flavour wise too, while there's a touch of roast atop the milky stout base in which you'll find some Black Forest cake vibes too.