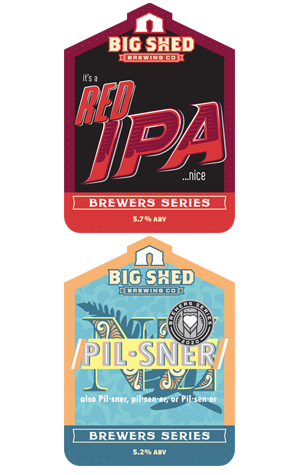 With the new brewhouse up, running and dialled in at the venue they moved into last year, Big Shed’s Brewers Series has stepped things up a notch. A series born to give the brew team some freedom and tickle their collective creative itches these days sees them canning the beers and shipping them across the country too.

Joining the series is this Red IPA, which pours an incredible deep, dark ruby red colour with a light brown and persistent fluffy head from which bitter grapefruit hop driven aromas launch the red IPA experience, with some resin hanging around alongside the sweet toffee. The malt structure parries the hop onslaught with solid hits of sticky toffee and caramel notes before the hops fire back with more bitter grapefruit, some rockmelon and even a touch of lychee on the back palate. A decent bitterness works through the early sweetness, ending with a moreish aftertaste as those flavours blend together.

As for the NZ Pilsner, it was brewed as a German style pilsner before being taken elsewhere with the addition of a trio of NZ hop varieties. The light malt structure and clean yeast characters allow those distinctive hops to sparkle: rockmelon, crushed gooseberries and lychee come through with elements of white wine. It shines with impressive clarity and clear white head while the bready malts holds the hops aloft before a wine-like dryness hits.