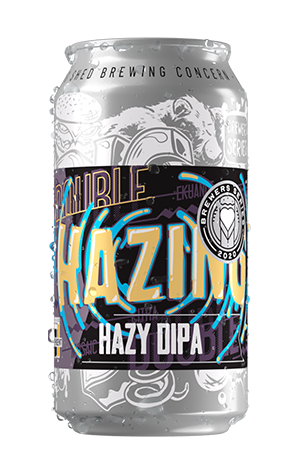 It's no secret one of Big Shed’s most popular Brewers Series beers is The Hazing, a 6.5 percent NEIPA [which won the inaugural Pint of Origin Blind Tasting Championship at Good Beer Week 2019 when we were still allowed nice things – Editor]. In order to shake things up and keep their fans guessing, the Big Shed crew decided to up the ante on this fan favourite, taking the booze to 9 percent, all while throwing in even more hops. It was first poured for the brewery's loyal members, the Shed Heads, as a thank you for their support during COVID-19 and is now available in cans and on tap.

Double Hazing lives up to its name, pouring a fluorescent yellow and completely opaque. The hop aromas come through in multiple layers of apricots, sweet melon and a little citrus – lime and orange. It's full-bodied without coming across too thick, with minimal booze burn and a restrained bitterness keeping things in easy-drinking territory (for a 9 percent ABV hazy IPA, of course). A little pineapple joins the other fruits in the bowl to taste, leaving you with one hop-laden, juicy beast destined to satisfy the itch of every lupulin-craving drinker.