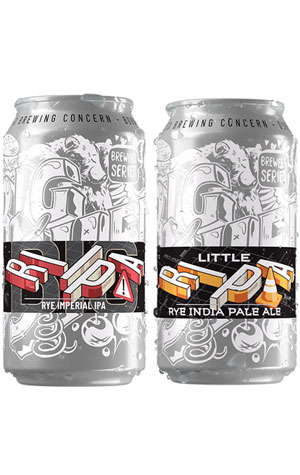 Why release one rye IPA when you can release two? They share the same DNA too as they were brewed using the parti-gyle technique to craft two beers from one: Big RIIPA was built from the sugary wort taken from the first run through of the mash tun before the grains were sparged again to extract the remaining goodness to create its little sibling. The result is two different beers crafted from the same initial genetics, that are further differentiated via different hopping regimes featuring Mosaic, Simcoe and Idaho 7.

The Little RIPA pours a light copper with the rye asserting itself from the get-go, but not in an overpowering manner; instead, there's a balanced rye spiciness that sits nicely alongside some Crystal malt nuttiness and sweetness. There is a decent piney hit too amid a medium to medium-light body which makes it pretty sessionable and easy-drinking as that early sweetness moves towards a light dryness.

As for the Big RIIPA, it takes on a deep copper colour with reddish tinges. There are similarities with its offshoot, such as the pine and rye spiciness, but throw into the mix some toffee stickiness and grapefruit-led citrus too. At nearly 10 percent ABV, no surprise this has one thick and malt-laden body as well as a grapefruit-laced bitterness that's solid without going over the top.