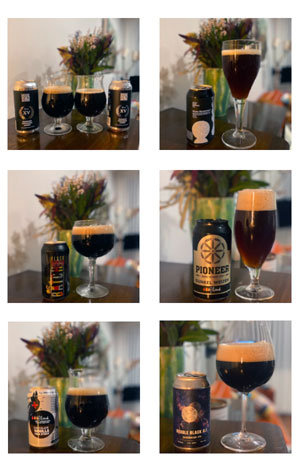 Whether you’re a brewery or booze retailer, reaching 15 years is an important milestone and worthy of a celebration. Canberra’s Plonk have done just that, working with six breweries to create seven unique dark beers sold in a special Winter Beer Box of 12. That’s quite a few numbers to get your head around and quite a bit to unpack (not to mention beers to enjoy) so let’s get stuck into what’s inside. Starting with the lightest in terms of ABV, but certainly not one that’s light in flavour, Thirsty Crow have brewed an extra rich version of their popular Vanilla Milk Stout; the 4.7 percent ABV Chocolate Vanilla Milk Stout. The Wagga Wagga brewery added some 20 kilograms of cacao nibs to the beer which not only provides a luscious array of chocolate milk flavours but a touch of berry alongside a caramel and vanilla edge.

Next up is Pioneer, with a beer style you don’t often see in Australia; the 5.0 percent ABV Dunkel Weizen. All of the wheat used in the beer was grown by Pioneer on their farm near Orange and it’s a beer that makes you wish more Dunkels would greet us in the cold. It pours with a dark amber hue and swells with notes of honey and toffee plus yeast flavours of banana and clove but still finishes dry enough to keep you coming back for more.

Stepping things up are Sydney’s Batch with their 7 percent ABV Black Mountain Double Milk Stout. It puts out rich toffee notes and, along with that and the chocolate, there’s quite a prominent roasted flavour plus a soft touch of aniseed. Speaking of doubles, we also have Prancing Pony’s Double Black Ale, which registers 8 percent ABV and has roasted notes aplenty. Besides those, there are hoppy hues of citrus and peach and what’s really quite a substantial bitterness towards the finish.

Playing with the same level of booze are Molly Rose, who have created Belgian Dark Strong Ale with a special tincture they made which included Oolong tea, spices and shiraz grape skins. It makes for a beer that has spice and savoury notes in equal measure, with prominent notes of dried cherry and raisin and a complexity from the Belgian yeast that makes itself known as the beer warms.

Finally, we have two barrel-aged Russian Imperial Stouts from Bridge Road, both of which are the largest in the pack at 9.6 percent ABV. The one aged in Durif barrels has picked up a lot of characteristics you’d find in red wine and is really quite sour too. Once you adjust to its gripping sourness, there’s notes of cherry and a strong tannic character for a beer that’s probably best considered a stout meets a Flanders red ale. The Corowa whisky-aged version has its own sourness too, though that’s there in lighter notes and joined by some peaty undertones.

So there we have it. Seven unique beers sold in packs of 12 to celebrate 15 years of Plonk getting good booze into people’s homes. And, if more than 500 words aren’t enough for you, head to Plonk’s website where the brewers have discussed the beer they made.

NB If you're wondering why this is listed on the Bridge Road and Molly Rose, it's because they're the first two to appear on our site alphabetically.

And if you're a Crafty Cabal member, you can try to win one in another beer club giveaway.