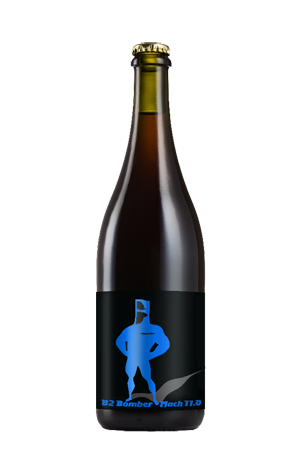 Sixteen years of beers brings us to the eleventh in Bridge Road Brewers' B2 Bomber series of birthday beers. Arguably what's most remarkable about the series – other than the typically high standard of the beers as they've evolved over the years – is how little else like them has appeared over the decade since the first one took flight. A black Belgian double IPA was a rarity then and remains one now, even with the B2 Bomber's cult status. Clearly, not too many brewers fancy throwing dark malts, Belgian ale yeast, and a mountain of hops into a ~10 percent ABV beer – in 750ml bottles, no less.

This time around, it feels like something of a homecoming. In 2020, the brewers added coffee; two years before that, there was an addition of immature spirit from Corowa Whiskey that took the beer to 11.5 percent ABV. Here, it's back to the traditional foursome – water, malt, hops and yeast – and it feels like we're hovering close to the beer's sweet spot.

It might register shy of double digits on the booze front, but remains full to the point of sticky and oily. Piney, herbal hops, treacly dark chocolate, and plummy, spicy Belgian esters lead the way in a sipper that gets progressively deeper and gnarlier as you go on, with the likes of leather and chocolate-coated liquorice joining you in your birthday tribute to one of the country's true innovators.