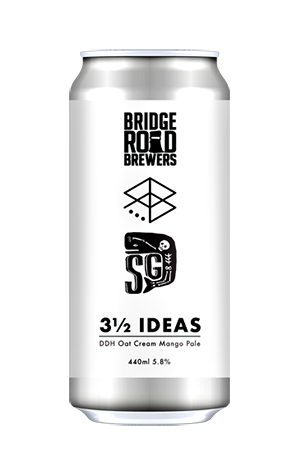 For quite some years, Bridge Road Brewers hosts a hop harvest festival in Beechworth, the High Country Hop. As part of that, they now invite some other brewers to join them to pour beer at the festival and join them in a collaborative brew. For 2021, Range and Sailors Grave were the friends who came along and added their experience, talent and creativity to the mix (unfortunately Range missed 99 percent of the festival, having been required to spend most of it in their hotel room awaiting a COVID result). Thus was born 3 1/2 Ideas DDH Oat Cream Mango Pale.

Style names and expectations are always a funny thing. An 8 percent ABV stout and a 12 percent ABV stout are both considered ‘imperial’, but no matter how good the 8 percent one is, the bigger one will likely be closer to what you were expecting. Two beers that have been soured and had fruit added will rightly be called ‘fruit sours’, but just you wait - people will complain about the one that doesn’t make their face pucker, even if it’s delicious.

This is a long way of saying - judge a beer on its flavour and quality, rather than based on how similar it is to other beers in the same category.

I say this because I did the foolish thing of shaping my expectations for this DDH oat cream mango pale ale based on other beers in the same category.

Everything in the name is an apt descriptor. It’s packed with mango; in fact, it exudes enough mango to make you want to use the word 'exudes' twice in one sentence. Once you’re accustomed to the mango, you can smell the tin of fruit salad aromas that come from the double dry-hopping of Citra, Simcoe and Galaxy. The smooth feel in the mouth comes courtesy of the oats and the lactose. And it is, of course, a pale ale.

And yet there are some expectation-defying aspects. Beneath the fluffy white head, this beer isn’t thick, sweet and syrupy like some others in the same style. There’s a dry graininess alongside citrussy hops, and a bitterness that comes in the form of orange and grapefruit peel up front before slowly easing off.

In summary, different beers in the same style can taste different. This is the end of my long, slow rant aimed at myself.