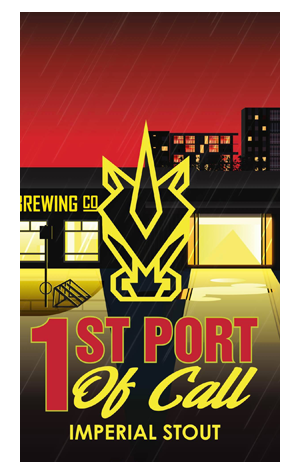 Being the closest brewery venue to Perth airport, Blasta may well be the first port of call for many travellers; however, back in 1829, the area was the last stop for Henry Camfield. The English gentleman settled on the Swan River peninsula, naming it after one of his estates, Burr’s Wood, near Tunbridge Wells, Kent – with Burrswood a moniker Blasta have used previously for their Helles .

Whether Camfield was a stout fan remains a mystery, but there's no doubt about Blasta owner Steve Russell’s affection for darker beers. Indeed, this was intended to be an imperial porter, before a last-minute recipe change – “I wanted roasted barley in it,” he tells me, revealing an impulse which reinforces this fact.

Milo and mocha malts lead, feeling almost creamy, before the palate flips midway towards a large dry Irish stout vibe, running dry and, thanks to a generous Columbus addition, bitter and resinous too.