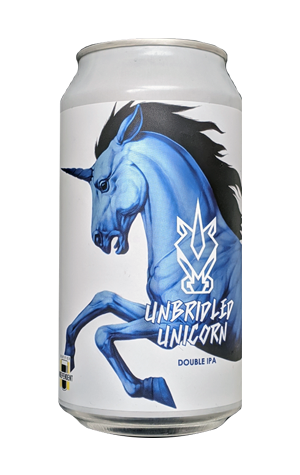 Unbridled Unicorn picks up from Blasta’s 2020 release List.Loud.React, a massive yet nimble double West Coast IPA brewed with Stone Brewing for a Metallica tour that never transpired. This time around it drips with the hype hop of 2020, Strata. The liquid blessing – that’s the collective term for unicorns, you’re welcome – is also flush with Citra, making this a very modern expression of such a beer, and something which hints at the decline in ubiquity of the American hop industry's classic Cs through the 2020s – at the pointy, or in this case, horned end, of beer at least.

The former’s strawberry jam character is evident on the nose with juicy citrus and passionfruit that join candied lime, peach and fleeting dankness in the glass. Light-bodied for size and running dry and bitter, this near 9 percent ABV beer remains exceedingly drinkable, which only leaves the question of who was mad enough to tether this beast in the first place.