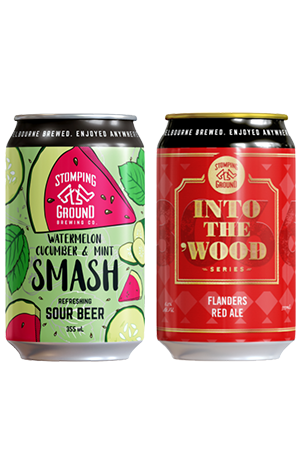 As 2020 comes to an end, Stomping Ground have released two very different sours from quite separate series from brewery. The first is the latest Smash, where Watermelon, Cucumber & Mint make it the most fruit diverse of the long-running series to date. That combination of flavours manages to be impressively well integrated, with the watermelon adding a touch of juice, the mint bringing more floral and perfumey notes and the cucumber being very … well cucumber-like. Unlike many modern kettle sours, it's a Smash that packs in the sour too, being quite acidity to aid in overall refreshment.

To borrow a phrase from BentSpoke’s cofounder Richard Watkins, the other release is less kettle sour and more cuddle sour. Flanders Red Ale is part of the brewery’s Into The ‘Wood series and was aged in Hanging Rock shiraz and pinot noir barrels. The Belgian-inspired sour pours a deep auburn and its complex flavours have as much depth too. Along with its vinous notes, there’s a touch of balsamic and cherry with a tart tang, thick mouthfeel and fair bit of funk.