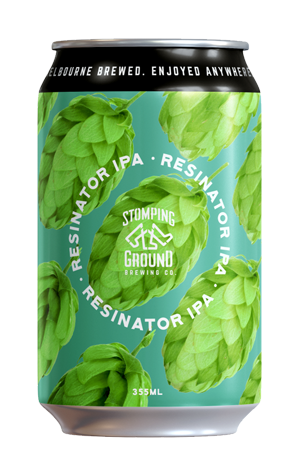 On the surface, there's little in common between the two cans to leave Stomping Ground in early June 2020, yet both conjure nostalgia for the mother country for this beer writer. In the case of Upside Down Brown it's easy to understand why as it's a beer inspired by those of the UK. For this IPA brewed with experimental hop variety HBC 520 (alongside Strata, Ekuanot and Chinook), however, it's a little more of a tangent, although I'll warrant there will be readers out there who see its name and find the opening tracks to Underworld's Second Toughest In The Infants flooding whichever synapses control auditory memories: "Resonator, resonator, resonator, resonator..."

The beer itself has a singular, driving purpose too; while I wasn't struck by too much in the way of the promised tropical fruit and grapefruit, it made for a pleasant change to be met by an IPA a far cry from the sweeter juice bombs and fruit salads of the past couple of years. It's a much more contained affair: lean, dry, tight and herbaceous initially with those fruitier expressions and a touch of malt sweetness given a little more freedom as it warms.