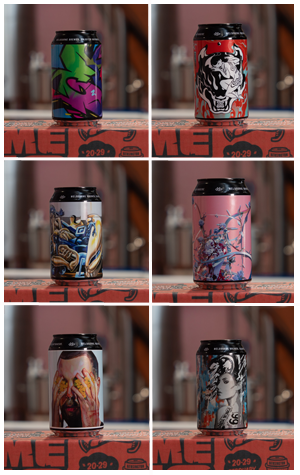 We've seen breweries release series of beers featuring different artwork in the past; Cavalier showcased a number of street artists in their Art Series back in 2015, for example. But Stomping Ground, as is their wont, have taken things a step or two further in their partnership with the Can't Do Tomorrow Festival. They're releasing no less than 100 different can designs from 61 artists for the inaugural event held in The Facility in Kensington from February 20 to 29. What's more, they've put together a few 100-can slabs featuring the entire lineup too.

The beer inside will be familiar to fans of the Collingwood brewery – it's their Laneway Lager – while anyone keen to get their hands on one of the limited edition, two metre, 40kg slabs has a few options. There's a competition which ends on February 29, and there's a few on sale at the festival where Stomping Ground will be running a "secret bar".

Can't Do Tomorrow kicks off on January 20, transforming the four storeys of The Facility from top to bottom with paintings, murals, photography, sculptures, illustrations, projections and installations. Full details here.