Beer Stomping Ground Into The 'Wood: The First Six 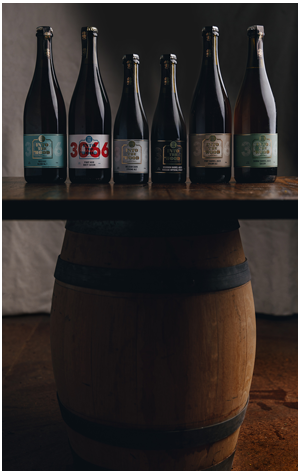 It feels a little sacrilicious to squeeze six beers like this into the one beer write up, but such is the nature of the beer world's release schedule these days, here we are. Into The 'Wood is a series that's been a long time in the making at Stomping Ground, with one of the beers here featuring liquids up to three years old and barrels and fruit at play too.

Working through them in the order you'd likely approach them, first up is the Shiraz Barrel-Aged Saison, which spent 12 months in former Heathcote shiraz barrels inoculated with Brettanomyces, which appears here quite subtle and drying. Indeed, there's a subtle complexity throughout, with malt sweetness, a touch of lemon acidity, some wine (or maybe Brett) derived cherry-berry sweetness and some pediococcus like grip on the palate. There are elements reminiscent of a sparkling shiraz yet don't let that put you off – it's my pick of the six.

The Pinot Noir Brett Saison featured grape skins from Sunbury, obtained by the brewery from Noisy Ritual. It's a far different beast to the above beer, mainly due to spending 12 months in stainless rather than oak. The nose is very rosé like, the taste moreso, with a little soft malt underneath to remind you the pale peach coloured liquid in your hand is beer. Somms the brewery team have shared the beer with reckon you could tell drinkers it was a pet nat wine, complete with tannic pull, and get away with it.

Wild Ale 1 is a blend of three years' worth of lambic style sour ales. Golden and clear with a white head, the sample we tried opened with a creamy almond aroma that soon cleared to release Brett-derived characters. You'll find some sweetness, with an aged malt character that rises over time, a soft acidity, some ripe stonefruit and a dry finish.

Moving into the heavier beers of the trio, you have Port Barrel-Aged Cream Ale, a beer that started out as their GABS 2018 beer poured into Port barrels along with some Brett. It's coffee (from Proud Mary) all the way on the nose; it's quite impressive that it's survived with such potency given all the beer has been through. There's dark berry flavours in there too, a pleasant acidity and biscuity malts that appear late on. It feels like something you'd like to take with you in a time machine back to the time you could still enjoy cigars on the sofas at Melbourne's Supper Club.

The Belgian Strong Dark Ale is the only one of the six not to feature barrels or Brett; instead, it's an attempt to recreate the sort of pleasures found in a St Bernadus 12 or Rochefort 10. It's 10.5 percent ABV of rich, dark ale awash with cake spices, dark rye bread, banana, rum and raisin chocolate bars and more. It's texture and dry finish put it more in Rochefort 10 than St Bernadus territory for me (if you're interested...).

The Bourbon Barrel-Aged Imperial Stout is a little different to many beers of its ilk. Sure, it pours a solid black with a tan head, but the time spent in Jack Daniels barrels hasn't delivered the bourbon intensity some possess. Rather, the sweet bourbon and vanilla are there, but there's liquorice on both nose and palate that's arguably the beer's defining character.

A beautifully presented sextet taking the 3066 postcode into a place a far cry from Collingwood's traditional stereotypes.