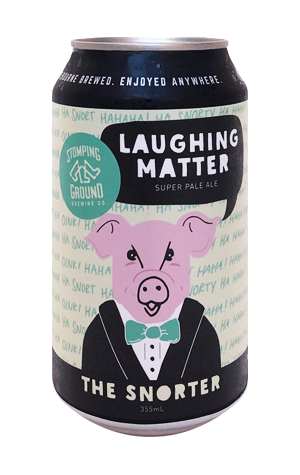 At the rate they've been going in their first couple of years of existence, forging partnerships left, right and centre across Melbourne, there's a good chance that, come 2030, the city will have been renamed Stomping Ground and we'll be living in some sort of Being John Malkovich-esque reality. The latest step along that road for the Collingwood-based operation sees them hook up with BOB Bar, a pop-up venue opened by Triple J alumni Alex Dyson and Kyran Wheatley for the duration of the Melbourne Comedy Festival.

Together they created Laughing Matter, a "super pale ale" that comes in a variety of cans – The Howler, The Snorter, The Cackler. Inside said cans is a beer that is indeed super pale and pretty damn hoppy too, firing off potent tropical, pineapple and slightly grassy aromas like a standup shooting down a tiresome heckler, then delivering pithy grapefruit like flavours on a lean and dry body like a master of the killer one-liner, complete with a layer of resinous bitterness [don't you dare add a third simile, Smith...].