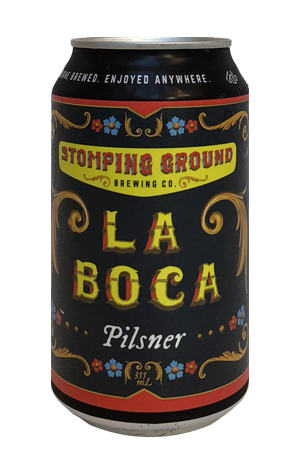 They love a partnership at Stomping Ground, especially when it gives them a chance to put their beers – and craft beer generally – in front of a new audience. For summer 2018, that's led the Collingwood operation to hook up with Arts Centre Melbourne to host a pop-up bar on the forecourt while Evita takes up residency inside. And, as well as stacking a couple of colourful containers atop each other from which to service theatre-goers and passers-by, they've create a beer.

La Boca is a pilsner, albeit one that's got its feet planted more in South American lager territory than the regions of Europe typically used as inspiration by local craft brewers. The goal, says head brewer Ashur Hall, was something akin to a "hoppy Quilmes" rather than a Jever so, while there's Kiwi Kohatu and Wai-iti hops added late, it's as much about the rounded, sweet malt characters and a touch of fruity esters as it is the floral hops.

For more on the La Boca pop-up, head here