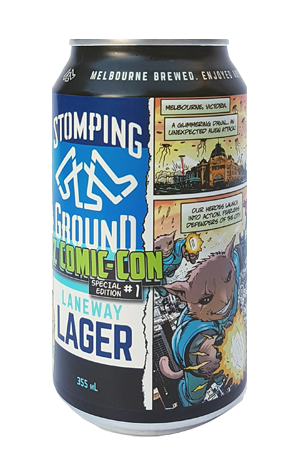 Oz Comic-Con may pass by unnoticed for some but, for Australians, it happens to be our biggest celebration of comic books and pop culture. Across Melbourne, Brisbane and Sydney, the conventions bring some of pop culture’s biggest fans and its biggest stars together for panels, screenings and countless opportunities to geek out.

Fans of both comic books and local beer who attend this year’s Melbourne Comic-Con will also be able to get their hands on Stomping Ground’s first “Comic Can”; a beer that features artwork from renowned Australian artist Wayne Nichols. Wayne has drawn comics for the likes of Marvel, The X-Files and Star Wars and, for his first foray into to tinnie tales, has depicted one of aliens invading Melbourne. Those hoping to find out how it all ends will have to sit tight until the Sydney and Brisbane Comic-Cons, where part two and three of the saga will be told.

It’s a venture that (as far as anyone can tell) is the first time a comic book story has been told across a series of cans and, as a result, there’s a feeling of the collectable about them. For those more interested in drinking it and want to know what the beer actually tastes like, it’s the brewery’s Laneway Lager. That makes for a beer that’s largely a straight, German-style lager with herbal and floral hop characteristics and a soft and clean malt body.