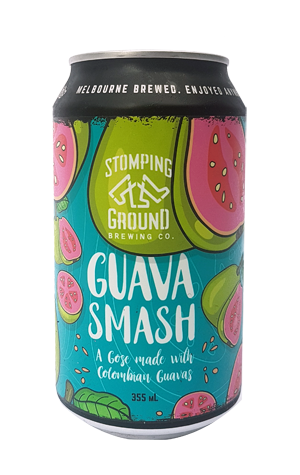 Since opening its doors, the Stomping Ground Beer Hall has poured a serious number of different beer styles across its taps, thanks to the efforts of head brewer Ashur Hall and his team. And, having started canning in recent months, more of the world beyond the Collingwood brewpub is getting a chance to sample that range – or at least select parts of it – too.

For the brewery’s latest release, they've stuck with the theme from their last, with Guava Smash following Watermelon Smash into its own colourful, fruit-covered can. At its heart is the tropical delight that is the Colombian guava and, unsurprisingly, it's tropical flavours that lead the charge. The beer underneath is based on the gose style and thus moves between sourness, sweetness and saltiness in the glass, with a pear like crispness completing the picture.