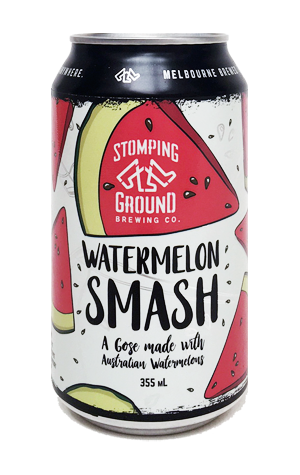 Collingwood brewery Stomping Ground launched its first tinnies over the festive period with flagship brew Gipps St Pale and Midsumma Festival collab PRIDElweiss. Now, while the mercury is still (mostly) high, they've sent their first seasonal out into the world. And it's a beer that's very much of its time: a fruit sour.

This one takes the gently soured and salted gose style as its starting point and then adds watermelon. We're not sure how much watermelon went into each batch (the canned version is a little boozier than one we tried at the brewpub previously) but, considering it's not naturally the most potent of flavours, we're going with "a lot" as it makes its presence felt. There's a more potent sour aroma than you find in some of its peers, where brewers mask such funkiness with bolshier choices of fruit, accompanied by a tart finish and enough balance to earn a top six spot in our "session sours" blind tasting.

And other good beer outlets