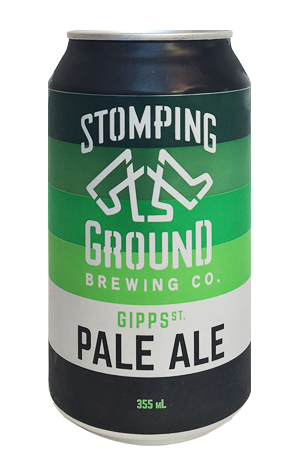 When the team at Stomping Ground fired up its canning line for the first time at the end of 2017, there was little doubt as to what beer would be rolling off it first. The Gipps St Pale Ale has become the brewery's flagship, collecting a gold medal along the way, and now appears inside stripey green, black and white cans as well as on taps across the country.

Given the beer was also at the centre of the brewery's successful attempt to raise $75,000 for Movember by selling a thousand kegs in a month, chances are that plenty of you will have tried it already so there's perhaps little left to say about it. If anything, this American pale ale has been finessed since being launched at the brewpub, offering up its well balanced mix of tropical, piney hops, supporting malt and drying bitter finish in a even more tightly wound package.