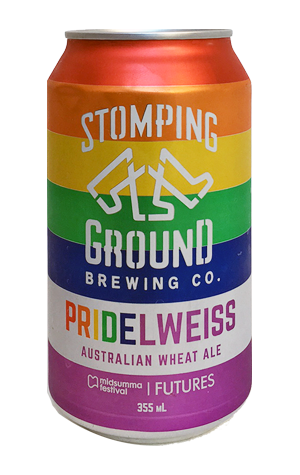 At the start of 2017, Stomping Ground Brewing Co launched a partnership with Midsumma Festival that saw them create a beer designed to help support artists within LGBTQIA+ communities. That beer was PRIDElweiss, with the brewery donating 50 cents from every pot sold to the Midsumma Futures mentoring programme.

A year on and the beer returns in a much-changed landscape as, following the often bitter campaign leading up to the plebiscite on marriage equality, the majority of Australians were able to celebrate the passing of the same-sex marriage bill at the end of November. The beer itself has changed too, both inside and out, becoming one of the first Stomping Ground beers to be released in cans.

Inside the rainbow cans, you'll no longer find a peach witbier; in its place is an Australian wheat – a hazy yellow beer with a fluffy white head that's just as fluffy and full on the palate. The brewers clearly haven't held back on the hops, with pineapple and mango dominating the aroma and a surprisingly grippy and resinous grapefruit bitterness delivering a lingering bite too.