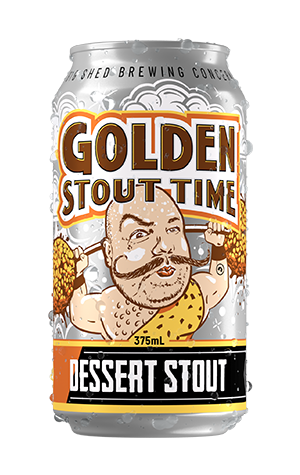 Our first port of call at this year's GABS in Melbourne was to say hello to Jason and Craig at the Big Shed stall (and try a glass of their Fresh Yeah APA if memory serves correctly). At the time, they were rather excited about the prospects for their GABS beer in the People's Choice vote. Their take on the Golden Gaytime ice cream was bringing lots of: "Wow! It really does taste like a Golden Gaytime!" gasps from drinkers and was scoring well too.

In the end, the beer ended up polling third out of well over 100 entries as the award went to BrewCult's fellow sweet stout, Milk and Two Sugars. But, they tell us, Golden Stout Time has ended up with a higher rating on Untappd than the People's Choice winner (although they refrained from adding: "So there.").

Its popularity was such that when they asked the online world if they should brew another batch the virtual applause was deafening. So they did. Kegs are on their way to venues and bottles will follow very soon. For those familiar with Golden Gaytimes, it tastes like one of those in beer form. For those that aren't, they added cacao nuts, rice and specialty grain to the base beer to create a honey aroma then added lactose (milk sugar) for sweetness.