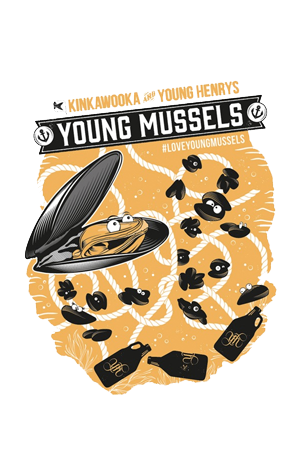 Most times when you see mussels added to a beer, it’s in a stout where the dark roast characters are able to comfortably incorporate a briny kick. But adding mussels to a witbier is a different prospect. There’s very little in the way of ballsy malt to mask the musk of the sea, so the brewer must be diligent in their calculations of how much to use. Yet the team at Young Henrys was generous in its estimations, adding 12 kilograms of mussels and, even more unusually, 12 kilograms of mussel stock.

For the seafood-averse, that might seem a terrifying amount but don’t be put off. Firstly, they got the team at Kinkawooka Shellfish involved and they supplied the young, small mussels which are available at the beginning of the mussel season and are sweeter than their larger cousins. Secondly, there are other ingredients at work here too. Having also had input from well known chef Luke Mangan, the beer has been infused with coriander seeds and kaffir lime leaves and this tide of spice somehow washes any strong mussel character away. It’s an extremely pale beer and, surprisingly – given its ingredients – is as light on the palate as it looks with the full cast of characters coming together in an unusually refreshing way.