Presumably every home brewer in Australia would like to have a family like Paul Morrison's. Having displayed talent for the art of brewing by picking up medals at competitions in his home state of Tasmania and in Melbourne, his dad suggested he should consider doing it commercially. Soon afterwards, with his wife, sister and her husband on board too, they put the first brew through a 500 litre brewery they'd built in a warehouse in Launceston.

From there, after seeing his first beer poured at Hobart's legendary New Sydney Hotel, Paul set about refining his favoured beers: traditional ales from the UK and Ireland. It's an approach that puts him at odds with most new brewers in Australia who tend to take their lead from the US or lavish their beers with powerful New World hops. But it's one that's done him no harm as he's steadily collected tap points around Tasmania – mainly in Hobart but increasingly in his hometown of Lonny – as well as a reputation for consistency.

Within two years, Paul was able to give up his job on an orchard to focus full time on brewing. And, in 2015, the brewery was expanded with new tanks helping fill the warehouse in Invermay. While they're most often filled with Paul's beers – the core range of Irish Red, English Bitter, Irish Stout and Pale Ale plus usually equally traditionally inspired seasonals – he's also been lending a hand to others looking to get started in the business. Brewers from the likes of Last Rites, kick|snare and Devil's Brewery have all brewed beers with Paul in recent years.

While you can increasingly find Morrison beers in bottles in both the brewery's home state and in New South Wales, the best way to enjoy them is in draught form. For now, this means travelling to Tassie where, as well as the growing number of regular tap points, you're likely to find them being poured by Paul and his family at many of the state's festivals. And, as of 2019, you can look out for some innovative limited releases from the Morrison team in tallboy tinnies too. Paul Morrison has favoured traditional beer styles ever since setting up shop in Launceston many moons ago, which means Morrison Brewery hasn’t forayed too much or that often into New World styles – until now. This Tasmanian IPA is brimming with tropical flavours, all borne from a trio of classic antipodean hop varietals – Ella, Vic Secret and Galaxy. But it’s not merely hoppy heavy-handedness, as a good dose of malts both balances and fleshes out the flavour profile. As I was told by someone… Read more
Golden Morrison's second beer inspired by Irish traditions is this stout, which is very much of the dry variety. Lightly carbonated, opaque and as close to black as makes no difference, there are aromas of cocoa, while in the mouth look out for some dark treacle too before the lingering back palate roasty bitterness comes into play.… Read more
Black Morrison's flagship beer is this Irish Red Ale, a smooth, medium-bodied take on the style that sells well throughout Tasmania all year round. It is a full-bodied and attractively coloured beer that is all about the malt, with flavours that range from sweet caramel through toffee to toasted malt with just enough bitterness to tidy it up at the backend. It's a nicely balanced, thoroughly enjoyable drop that collected silver at the 2016 Australian International Beer Awards.… Read more
Rich Brown This is Morrison's take on the relatively low alcohol English pub bitters prevalent across the UK. Golden in colour, it gives off aromas of soft malt floral hops. There are some pleasant earthy hop flavours in what is a balanced beer with a soft lingering bitter finish.… Read more
Golden Cast your eyes over the range of beers released by Launceston's Morrison Brewery today and it covers a huge range, from fruit sours to a number of saisons, hop forward US style beers and high alcohol beasts too. It wasn't always the way, however, with the brewery specialising in British and Irish styles for the first years of operation. And the first beer to break that habit and stick around as part of the core range is its Pale Ale. Built upon a base of specialty malts that contribute caramel and… Read more
Golden As reasons go for creating a new limited release beer, welcoming a new baby into the world is up there. It's a policy that Paul and Melissa Morrison embarked upon when they had their first child, Angus, and one they've stuck to since. Given it's a family run enterprise that goes beyond just Paul and Melissa, they're creating beers for both the siblings and cousins that have followed Angus (he was a massive barrel aged Scotch Ale, if you're wondering). The latest arrival in the "Junior Brewer"… Read more
Red 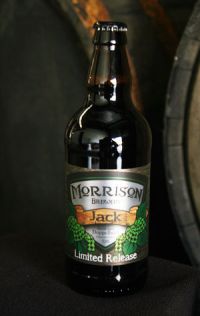 It's been a busy few years for the Morrison family. Not only did they open their brewery in Launceston and then spend the subsequent years adding more and more beers to their lineup – as well as helping other brewers get off the ground – but head brewer Paul, wife Melissa and now Paul's sister, Jess, and husband Bevan, who are part owners and frequently lend a hand when the brewery rocks up to public events have been preparing the next generation of brewers too. The growing collection of "junior… Read more
Dark Brown

And select bottleshops around Tasmania

Across the land, brewers have been slaving away creating their entry for the Great Australian Beer SpecTAPular. Among them is Paul Morrison, co-owner and head brewer of Launceston's Morrison Brewery. But not only has he been creating a new beer for this year's event, he's also brewed a fresh batch of last year's entry. His 2013 GABS beer was an English IPA, in keeping with his love of additional British and Irish ales. The new version features a different yeast and Paul tells us we should be looking… Read more
Golden

It looks like a case of "giving something back" here as former home brewer-turned-brewer Paul Morrison has opened up the doors of his brewery to another home brewer. This Imperial Wit was originally brewed by Stuart Grant for the home brew comp at Launceston's Esk Beerfest. It took home first place, earning him the chance to brew it on a commercial scale. That he did with a local brewery that has proved itself rather adept at Belgian style brews with its fine limited release Saison. This… Read more
Pale Yellow

What better way to celebrate bringing a new brewer into the world than by brewing a special beer? And when we say special, we are talking an 11.8%, whisky barrel-aged beast to boot. This started off as a whopper of a Scotch Ale and then spent four months inside oak from Tasmania's Lark Distillery, picking up additional touches of oak and vanilla to complement the multilayered, sweet and boozy malts of the base beer.… Read more
Rich Brown At launch, this was a rare trip for Paul Morrison outside the British Isles and Ireland for inspiration for this seasonal that was first released in 2013. He's since ventured far beyond, adding American style pale and amber ales to the core and limited run lineup, as well as brewing other European style beers. And this Saison, which is released annually in 750ml bottles, suggested it was a smart move casting the net wider for influence too. As one would hope from such a beer, it is zesty, dry and… Read more
Golden Yellow