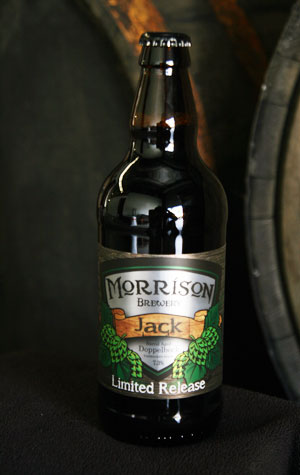 It's been a busy few years for the Morrison family. Not only did they open their brewery in Launceston and then spend the subsequent years adding more and more beers to their lineup – as well as helping other brewers get off the ground – but head brewer Paul, wife Melissa and now Paul's sister, Jess, and husband Bevan, who are part owners and frequently lend a hand when the brewery rocks up to public events have been preparing the next generation of brewers too.

The growing collection of "junior brewers" get a beer brewed in their honour with the latest being for Jack, the firstborn for Jess and Bevan, whose beer was even longer in the making than he was. The doppelbock [strong, dark German style lager] was barrel aged for more than 12 month before being bottled.

According to the Morrison clan, Jack "pours a bright ruby red and leaves fine white lacing down the glass" while offering aromas of "fresh baked bread, sultanas and dark fruitcake" plus flavours of "caramel, cherry and oak." They also reckon its "long smooth finish with some alcohol warmth" makes it a beer to share it for dessert, or one to match with strong cheese or roasted and cured meats.

Next in line is Jack's sister Ellen - with a German style of beer Paul'sbeen dying to brew for an age...

And select bottleshops around Tasmania