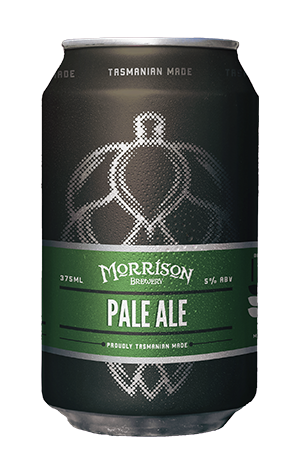 Cast your eyes over the range of beers released by Launceston's Morrison Brewery today and it covers a huge range, from fruit sours to a number of saisons, hop forward US style beers and high alcohol beasts too. It wasn't always the way, however, with the brewery specialising in British and Irish styles for the first years of operation. And the first beer to break that habit and stick around as part of the core range is its Pale Ale.

Built upon a base of specialty malts that contribute caramel and biscuit to the mix, the star is Tasmanian grown Ella hops that lend the beer a lively New World character: fruity and floral on the nose with some spiciness to taste too. Brewed for Tasmanian conditions, there's a bit more of a malt body to hold on to compared to the "mini IPAs" that have become popular, with this solid pale ale delivering a chewy backbone and a full body. It’s quite a more-ish drop with the relatively light carbonation making it easy to come back and makes for a great beer to pair with food where lighter pale ales may get lost.