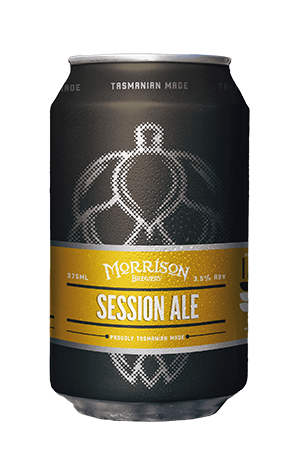 Tasmanian brewing stalwarts Morrison Brewery, based in Launceston in the state's north, have undergone a brand refresh while moving their beers into cans. And, as they do so, they've welcomed a new beer to their core range too.

Mid-strength hoppy beers can be hit and miss, with the risk you compromise body and character for the reduction in alcohol, or that a desire to pack in as much flavour as possible puts a beer out of balance. Morrison's foray into the increasingly popular space, however, has me ready for the spring sunshine in Tasmania with a backpack full of yellow-labeled tinnies heading for a walk in the bush to find the perfect patch of sun.

Session pours a light, slightly hazy gold with a mellow head. The balance is spot on, with biscuity malts blended with a zesty citrus hop flavour. That zesty citrus is prominent on the nose too in a beer that offers what it says on the can: session. The 3.5 percent ABV makes it a smart choice for anyone wanting to sink a few pints (if you’re allowed to go to the pub, of course) or crush a few cans.