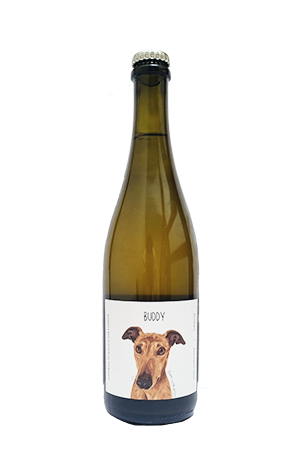 If you’ve spent any time with Casey Grieves and Hannah McErlane, the couple behind Sobremesa, you may well know there’s a third staff member behind the small fermentary and blendery. Buddy is their beloved rescue greyhound, who isn’t one to shy away from making sales calls. At the start of 2022, Buddy was given his own beer too, with 15 percent of sales of the beer used to raise money for the Melbourne-based charity Amazing Greys.

Buddy’s beer is a barrel-fermented grisette, which went through primary fermentation for ten weeks with a range of Brett yeast strains. That's a relatively short ferment by Sobremesa’s standards, the idea being to keep the funk restrained and the beer vibrant. It's certainly achieved that too, with clear, fresh notes of lemon, peach and apricot all rising from the beer as soon as it’s cracked. Joining it are some doughy bread characters, spices and a soft and smooth texture that coats your month before disappearing into the beer’s spirtly carbonation and crisp finish.

Nice one, Buddy: you’ll have to brew again.

Available through Melbourne bottleshops and directly from Sobremesa.