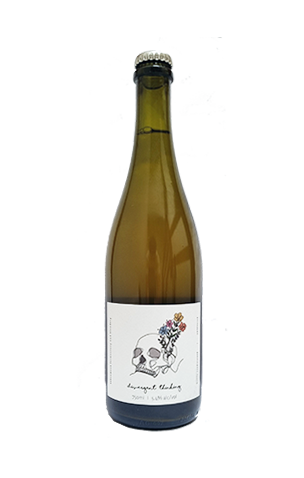 Much like the term itself, Sobremesa Fermentary & Blendery’s Divergent Thinking is a launching pad; a free-flowing, non-linear idea that allows creativity to shine. The barrel-aged saison features a mixture of beers aged on oak with the aim being to see how those different barrels and different Brett strains interact with different hops; there's a plan to revisit Divergent in future years.

The first release, which came out right at the end of 2021, is a blend of two barrel-fermented saisons, with 63 percent of the final beer aged for 11 months and the rest aged for 16. The recipe includes pilsner and wheat malts from Victoria's House of Malts, along with rolled oats, spelt and rye; both Saaz and Tettnang were added during the boil for bittering, only for the beer to be dry-hopped with Saaz and Motueka in the days before bottling, at which point three different Brett strains were added.

The result of all those ingredients and patience is a Brett saison serving up citrus - largely lime, tangerine and orange zest - and more funky notes akin to hay. Add in honey and spice, lively carbonation, and a clean, dry finish and you have a beer that, just like the phrase, takes you in many different directions.

Available through Melbourne bottleshops and directly from Sobremesa.