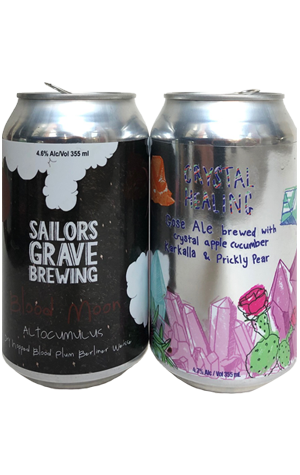 Picture the scene: you're sat in the Stone Circle at Glastonbury, awaiting sunrise over the valley below, when the friendly hippy you've been chatting to offers you a swig of their drink. Six hours later, you're in the Green Fields with beads in your hair, chanting, and handing out free massages to passers-by. And you're not totally sure how you got there.

If such an occasion needed beers to go with it, Sailors Grave should be able to step up to the oche: Into The Pines, Tangerine Dream, Dead Will Rise, Milky Way and now Blood Moon and Crystal Healing... "Hey man, what time does Furthur depart?"

Blood Moon is the latest in their Altocumulus series of dry-hopped fruit Berliner Weisse, with hops this time around Amarillo, Cascade and El Dorado, fruit coming in the form of local blood plums from Picnic Point Farm. The combination creates a shade that's part pink, part lilac, part mauve, and conjures memories of wandering a food court in Thailand, albeit one far from the Western hordes. The plums create a deep, fruity character and contribute to an acidity that undercuts the beer's creamy side, with the whole shebang topped off by some fruity hop aromas.

As for Crystal Healing – People's Choice Best Beer at the 2019 Good Beer Week Gala Showcase – it's a mouthful in all ways, being a collab with Stomping Ground and Little Latin Lucy and a gose featuring 100kg of Crystal Apple cucumbers grown on the family farm plus foraged karkalla (AKA pig face) and prickly pear. And it smells like it's been foraged too: dry, windswept and herbaceous; floral as if you're burying your nose deep into a blooming flower; earthy and musky too; and with a finish that's sour and dry. Not totally unlike that hippy from the Stone Circle, in fact.