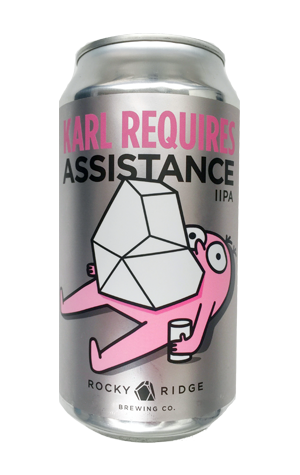 Karl requires assistance. Exactly with what remains a mystery but, for his debut in what looks to be the first of multiple releases in the "Saga of Karl", he sure could use a hand.

Perhaps it’s the crushing weight of the five different malts that were employed in this imperial IPA – the most ever in a Rocky Ridge beer outside of the recent barrel aged imperial stout. These come across clear and sweet, yet Karl still requires assistance.

Maybe it’s the curious selection of unnamed hops that deliver rockmelon, sherbet, citrus and apricot with an interesting vegetal background character. Not to mention a forthright bitterness wherein a residual hop bite builds increasingly aggressive layers through each sip. Maybe this is where Karl needs help?

Then again, it could be the 9 percent ABV that contributes considerable warmth and a little alcohol sweetness that's the source of Karl’s cri de coeur.

Whatever the cause, Karl requires assistance. Can you help?

Karl will be accepting assistance across WA from September 21