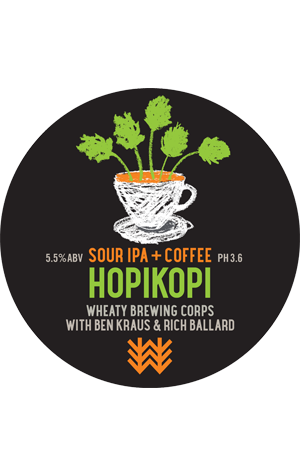 Every year, around the time of the Tour Down Under in Adelaide, Ben Kraus from Bridge Road Brewsers stops in to the Wheatsheaf Hotel to collaborate with Jade Flavell anf the Wheaty Brewing Corps team. At their 2018 brainstorming sessions, the table lit up with an array of interesting concepts, an array that started out with IPA and hoppy, to which Ben added: “Let’s sour it with Greek yoghurt, then add coffee”, and that ended up as Hopikopi. It might sound like a monstrous beer that couldn’t possibly work [and wouldn't be the only time you could say that about a Wheaty or Bridge Road beer – Editor] yet the expertise and finesse from these two industry stalwarts (aided and abetted by Rich Ballard from Black and Brew Coffee and his cold brew concentrate) has tied the elements together to create a balanced yet complex beer.

The beer – light in body and super refreshing – pours a light orange to deep golden colour with a light and wispy, fluffy white head. The aroma is multifaceted, with a zing from the souring bacteria, followed by big white wine aromas from the Enigma hops (joined in the mix by Warrior El Dorado and Amarillo), a touch of juicy orange and then an earthy coffee hit. The sour side of the beer wakes the taste buds first; next comes intense hoppiness, again white wine like with orange hiding in the background, with the coffee arriving late on, before the beer's big, dry, puckering finish.