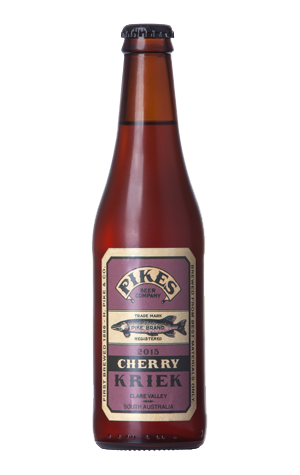 The planning and preparation for the Pikes 2015 vintage Cherry Kriek began in late 2015. A whole year later and the beer was finally ready to drink, meaning a lot of effort and love went into this vintage – and it was totally worth it.

The base beer was brewed as a strong ale that used a Belgian yeast for the first ferment. The wort was then soured using lactobacillus and pumped into Pikes Wines barrels that had formerly housed Shiraz and Grenache. The Pikes family then enlisted the help of their cousins – Joyson Orchards – from whom they obtained fresh Adelaide Hills cherries to add to the barrels.

After nearly 11 months in the barrels, the cherries and bacteria had done their work, leaving behind a cherry Kriek that pours a ruby red colour with low carbonation. A bouquet of vinous cherries leaves the glass on first inspection, and it's an aroma enticing enough to occupy drinkers for some time. The first sip offers up slightly tart, soured cherries without being overly sour, before a refreshing sherbet aftertaste leads into a gentle dry finish.

The result is a beer that, even at 7 percent ABV, qualifies as a refreshing summer drink.