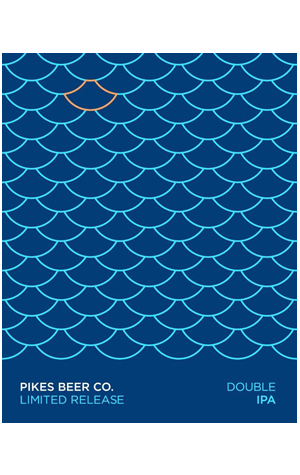 Increasingly, it seems rolling out a steady stream of limited release beers is a necessity in the modern world in order to satisfy drinkers' insatiable desire for the new. It's also a chance for brewers to explore new territory and showcase brewing prowess and it's a space in which Clare Valley's Pikes Beer Co has stepped up their game, with their second in quick succession this double IPA. With the brightness of spring arising from the bitter cold of winter, Pikes has added some illumination too, with the beer released in their scaly new 500ml bottles and as welcoming as the new season.

The IIPA pours a super clear, deep golden colour, with a head that's fluffy, bright white and sticks around, firing off fresh tropical fruit aromas; pineapple is at the forefront alongside passionfruit and a touch of mango. It's leaner and easier drinking than you might expect of such a big beer, carrying those fresh, pineapple dominated fruit flavours from the first sip, supported by a biscuit malt backbone. The bitterness is subdued, while there's a subtle sweetness flowing throughout, before it finishes medium dry.