Modus Operandi fans may have cracked their last 500ml tinnie of Former Tenant. But don’t worry: the beer’s not going anywhere – other than into smaller cans.

It’s part of the Northern Beaches brewery’s rebrand, with a new look core range – including new session ale Wippa Snippa – in 375ml cans launching in Sydney tonight (Feb 28). And, while brewery rebrands are far from rare these days – some seem to switch guernseys every season – given Modus Operandi’s achievements in its first five years, it’s worth asking why they’re downsizing.

After all, take away the copious awards and you’ve still got the first local brewery to import and use CANimals, a pioneer in the realm of 500ml cans, the first to opt for a single can design with individual beers differentiated by labels, and an early proponent of packaged on dates. What’s more, while few readers may be aware of this given it happened so early on, Modus Operandi rebranded within months of launching, despite having stormed the inaugural Craft Beer Awards within months of releasing their first beer.

Modus co-founder Grant Wearin says the decision was led by the brewery’s growth and their desire to give drinkers the chance to buy their beers in a more familiar size.

“As we’ve grown, we’ve got more and more consumers that want to drink our beer and have heard about Modus and what we do,” Grant says.  “Sometimes the 500ml can, coupled with the high alcohol beer, could be too much to undertake.”

It means cans of Modus will now come in at a lower price point and grabbing a four-pack might become a more regular occurrence for fans of the hoppy beers upon which the brewery has built its reputation. Given some of the higher ABV limited releases like the current Future Factory IIIPA have been landing in some bottleshop fridges around Australia at close to $20 for a single 500ml can, it’s a valid consideration – even if Grant questions our suggestion that drinkers remain more willing to part with big bucks for an elaborately packaged, wax seal and all, limited release in a bottle.

"I think our brands been able to carry it," he says, "but I think some brewers could see the 'cheap tinnie' misnomer might apply.

"If you go to a good bottleshop and see the shelf space allocated to craft beer and then tins versus bottles, the shift is remarkable."

As well as the lower price point, the amount of alcohol was also part of the brewery's decision-making process; at 7.8 percent ABV, a 500ml can of Former Tenant delivers more than three standard drinks.

He's also been monitoring discussions in other markets around restrictions being placed on breweries releasing high ABV beers in large format packaging.

“I just think that when you make decisions in beer you have to look four or five years down the track,” Grant says. “There’s nothing that I’ve heard of in the Australian market but it doesn’t mean it won’t happen.”

Along with Former Tenant, the brewery’s Pale and Sonic Prayer are joined by the (almost) mid-strength Wippa Snippa, a beer they've been working on for some time as the popularity of lower ABV hoppy beers has continued to rise.

“I think the craft consumer wants something to fall back on without going back to the mainstream or something less flavourful,” Grant says. “We think this helps them with that, as does the fact it’s one standard drink in a can.”

There’s another significant change too: the brewery has added nine month best before dates, having previously only used packaged on stamps since starting canning. Last year, Grant expressed hesitancy about the need for best before dates but now, as a member of the Independent Brewers Association, says they’re keen to follow the association’s guidelines.

“We’re proud and happy to have led the way on packed on dates," he says, "and now I have to get my head around best before despite it not being particularly applicable for a Modus beer because it always has that pack on date." 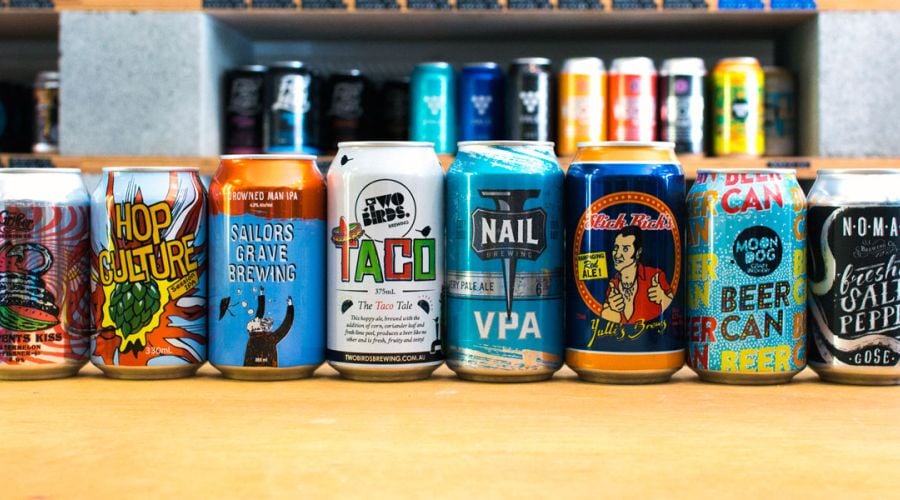 Mark Gamble swapped London for Melbourne and has been working with local breweries in his role as a visual designer and art director. Here, he tells us about his approach to Instagram with his Malt & Lead account. read on