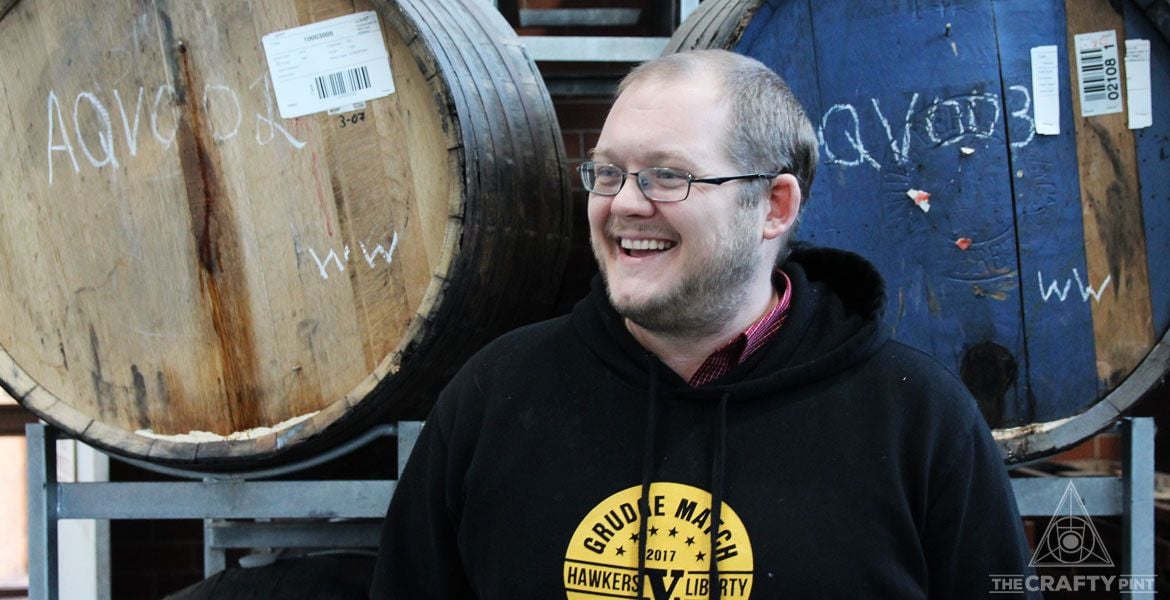 Melbourne brewery Hawkers is approaching the midway point of a burst of barrel aged releases that could well be the densest yet seen in Australia. Following a triplet of aquavit-ified Wheat Wines, a bourbon barrel aged Old Ale left the brewery this week and there are various imperial stouts to come, including one aged in rum barrels, plus a barrel aged farmhouse ale and a dubbel.

In total, ten different barrel aged variants will leave the brewery in little more than a month and, if you poke your nose around the Reservoir site, you'll find many more barrels too – most filled, some newly arrived like their first Cognac delivery. Overseeing the development of the barrel program is head brewer Justin Corbitt, an American whose first day at Hawkers – his first in a commercial brewery – was less than three years ago.

It's a pretty rapid rise, so we thought we'd fire a few questions at him for our Brew & A series, but also caught up with him at the brewery to find out more about the barrel program and the team around him.

Before Justin Corbitt was in the beer game, he inhabited the world of scrap metal and minerals. It's a career that took him to Eastern Europe, China and, eventually, Singapore, where he started homebrewing.

Eager to move away from the world of commodities and into that of beer, when Justin landed in Australia he decided it was time to take his passion for brewing professional and, despite having no formal experience or training, it didn't take him long to do so.

By October 2015, he'd met Hawkers Beer's first head brewer, Jon Seltin, and managed to land himself a job on the packaging line. Three weeks later he was on the brew deck. Less than 18 months later, after Jon moved to Brick Lane, he was installed as head brewer.

"It’s really become this huge team effort where we sit down and say, ‘We are going to make an XPA now’ and then we all submit ideas and all work through it,” Justin says of the team approach at the brewery.

It's a brewery team that's made up of close to 20 people overseeing production of the Hawkers range as well as beers for the likes of Pact, Venom and Liberty. From pack line leader James Graham to the highly experienced and well-travelled Alex Lovelock, who is in charge of quality and the cellar team, plus CEO Mazen Hajjar and head of sales Mik Halse, Justin has plenty of knowledge to lean on when it comes to new beer development.

“Alex is awesome because he’s just a workhorse," Justin says. "He’s so good and he’s an avid homebrewer and he’s great at recipe development."

Nonetheless, since taking the head brewer role at Hawkers, it's the American who's been one of the main drivers behind the barrel program.

“I’m a big, barrel aged beer guy; it’s what I really enjoy drinking as well," he says. "When Jon was going and Mazen was giving me the shot, I said one thing I really wanted to do was barrels – if you’re going to have a pet project it might as well be something you prefer to drink.”

For a large production brewery with an expansive core range, Justing says that running a barrel program isn't without its risks.

“It’s kind of the Wild West, you don’t really know what’s going to happen," says. "So you put the beer in there, you seal it up, then you wait.”

As for future plans of an oaky nature, he says: “I want to do an anniversary blend. Like you see Firestone Walker release every year, where they pull barrels from their stock and blend all these crazy things together.

"I think we are finally at the point now with our barrel inventory that we can do that.”

In my mind, the logic followed that if I got in a job in the beer industry, I would get to work with awesome people that liked good beer. So, that’s what I did and luckily the gamble paid off. The crew at Hawkers is absolutely amazing and working with them every day continues to be a highlight

I’d most likely still be in the scrap metal business.

In 1999, I was in a boutique wine shop in the university town located across the river from my hometown. Aside from wine, they had a small selection of beers I had never seen before from the likes of the UK, Canada, etc. One of those beers was in a large format bottle, had a winged demon adorning the front, and was called Arrogant Bastard from a small brewery out of California.

The bottle cost $9, which was as much as an entire case of the beer I was drinking at the time – good ol’ Natty Light. I was 17, so I couldn’t buy the beer myself, and had a friend who was aged appropriately pick up the bottle.

I’ll never forget that taste. Big flavour, hitting me like a freight train. Obviously, I couldn’t afford to drink beer like that all the time, but in my mind a line formed separating good beer from everything else.

While living in Singapore, I joined the Singapore Craft Brew Club. It had started as a homebrew club but then evolved into a good beer appreciation club.

I ran in the annual elections and was elected Treasurer, I think. At the start of my term, the President moved away, and I was asked to be the Acting President. From there, I took the reins of the club, and that was my true introduction into the beer world as then I started meeting venue owners, brewers, homebrewers and the like.

Let’s just say, I get very excited every time I see our West Coast IPA on the schedule to be brewed and even more excited when it’s coming off the packaging line.

Absolutely. Making good beer is all about experimentation and, just like Dr Frankenstein discovered, sometimes your creation escapes and terrorises a small village.

Not an easy question to answer.

I’d like to play with recipe formation and technical brewing at Hill Farmstead.

I’d’ like to play with malt at The Crux Fermentation Project.

I’d like to play with hops at The Alchemist.

I’d like to play with fermentation and yeast (amongst other microorganisms) in Belgium.

And I’d like to play with barrels at Jackie O’s.

Tallboy & Moose; I Iove what those guys have done and continue to do. Also, big shout out to my man Joseph and Liberty Brewing in New Zealand - keep up the good work!

If I had no way to keep it cold, I’d go pasteurised, macro lager as it’d probably keep the best. If I had a cave for cellaring, I reckon Bruery Black Tuesday would help me forget that I’m stranded. And, if I had a fridge, I’d try to convince Mazen to parachute down fresh cases of West Coast.

Not sure. I reckon I’d ask Alex Lovelock, our head of cellars and quality, to put together a never-ending playlist as I bet he has forgotten more about music then I’ll ever know

If anyone is interested in sales, I can put them in touch with Mik and you can ask him.

Articles by Will
brew & a hawkers barrels