What's In A Name?

What's In A Name?

What's in a name? That which we call a beer by any other word would taste as sweet.

Well, yes, technically Billy Boy is correct. A beer is going to taste the same regardless of what it’s called, but now that there’s somewhere in the region of 14 billion beers on cold room shelves and tap lists around the country, a shit name may mean no one bothers tasting it in the first place.

While many stick to the [Brewery Name] [Beer Style] format, in an effort to be original and distinctive plenty of brewers mine the rich seams of pop culture for frequently pun-laden names that achieve the right balance of idiocy and excellence. And, just like naming an infant human, for every Saruman or Zangief there’s a Kaighleigh, Mhavryk or Mark Latham.

There are fine examples to be found across Australia, from Sailors Grave's debut release Down She Gose to Pact's L Yeah hoppy lager (featuring Loral hops), Moon Dog's Curtly Ambrosia and any of many released by the Wheaty Brewing Corps (pictured above). The Crafty Pint has been known to get involved on the very rare occasions we've collaborated with a commercial brewery: Landlady English pale ale (a Crafty Cabal brew made with the Wheaty) was a play on Timothy Taylor Landlord; the Auld Bulgin' Boysterous Bicep a convoluted nonsense of a name that changed on the morning of the brew day back when we created the smoked Belgian imperial mussel and oyster stout with Murray's.

But what better way to explore the ins and outs of creating a great and chucklesome beer name than by talking to some of the best in the business: Will Irving – head brewer at Feral, Brendan Chan – head brewer at Brisbane Brewing Co and Iain McKelvey – tasting room and events manager at Batch Brewing Co?

What's your main driver for coming up with a good name for your beers? 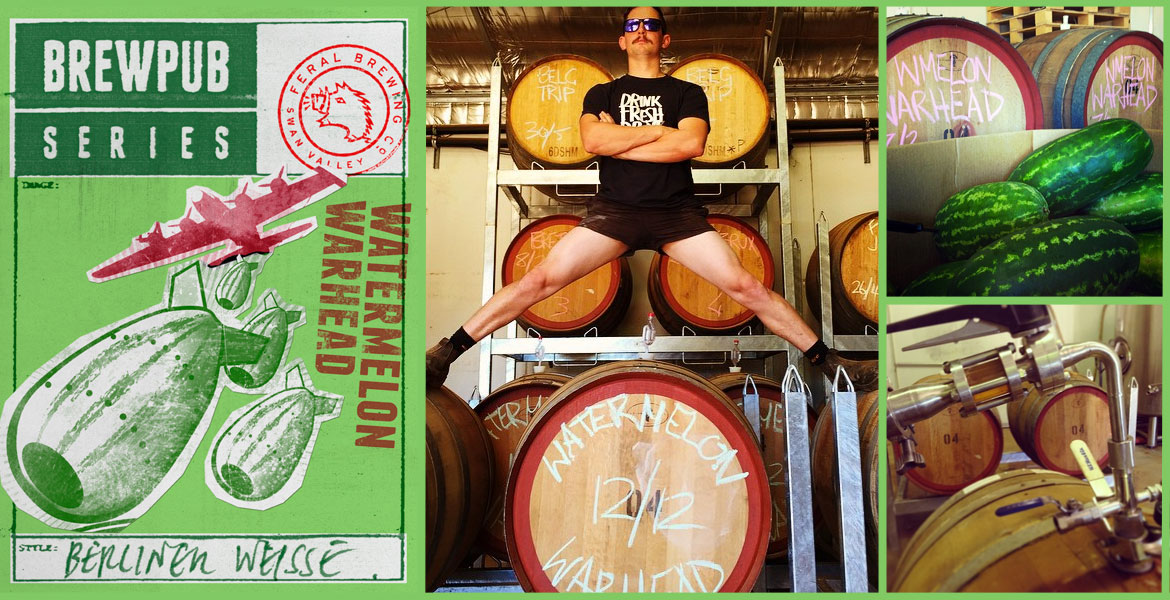 Will Irving (pictured above): There has to be some sort of cringe and/or “I see what you did there” factor. It can’t be Captain Dad’s Amateur Hour.

Brendan Chan: Puns are lame and super played out... But, they can also be quite clever, fun and original. I like cheesy things: cinema, music, cheese; it makes sense that I'd be into cheesy wordplay too.

Iain McKelvey: A good pun is like a good beer: well balanced, mature, a little bit bubbly and has been brewing for centuries. All these things must be fermented accurately to match pun with beer.

Do you think of a great name and brew a beer around that or does the beer come first always?

WI: Usually the beer comes first followed by the name, but if it is a cracker then you will find a beer for it pretty quick.

BC: Sometimes the pun comes first and we build the beer after the fact. For example, recently we had to make a beer for some good buds of ours at The Scratch Bar who were doing a Stranger Things art show. We named our beer RhuBarb, after the unsung hero Barb; the beer came after the pun.

Usually, however, we brew the beer and frantically name it and design the decal the day before (if we're lucky) it goes on tap.

IM: We have had the odd occasion where a name has spawned an idea or slyly dictated a direction. But it is always about the beer. If the beer doesn’t have it’s own solid foundation to build on and thrive then what’s the name? The name is just a bunch of people in a building trying to outsmart themselves.

Why do you think beer in particular lends itself to weird and wonderful names?

WI: I don’t think we take ourselves too seriously. Wine has the perception that you should own a cashmere cardigan to drink it (boxed wine excluded) where beer is fairly free from any stigmas of wankery (Portandia–esque, vegan, cisgendered beer geeks excluded).

BC: I think beer in particular works well because we're mostly pretty un-serious folk. We make beer because we love it and want to share that with other people. We aren't trying to isolate ourselves in a chamber of noncy lingo and self serving jerk-offery. It's fun!

Craft beer is approachable, and I think the often silly names reflect that.

IM: Beer is associated with fun, sharing, good stories and even better ideas. Whether you are inside or outside of the industry, most people are familiar with those four lovely individual letters that come together to make that delectable word: BEER.

At the core of it, we work in this industry because it is fun, and we want others to share in our fun. Some of the ways we do that is in the names we give to our babies.

Do you have any favourites of your own or any that come with a good story attached?

WI: The Karma Citra, Barrique O’Karma, Karma Chameleon series. Before it was released Karma Chameleon was originally called Osama Bin Karma with the decal being a picture of Osama Bin Laden with a bunch of bottles of Karma Citra strapped to him. Safe to say that didn’t get pass the boss…

BC: We made a beer with some wild collected Kopi Luwak (coffee literally sifted from the poop of a small Sumatran mammal called a civet), it was for our "Bocktoberfest" a couple of years ago, we named it "Stool of Hard Bocks".

I'm also quite fond of Aye Aye IIPA; it's quite unusual in its simple elegance. Most of my pun-work is far more crude and clunky.

There are quite a few that I like, [with a] by no means an exhaustive list, or in any particular order: Sex, Drugs and Rocky Road; Whoa Black Bretty; You’re In – Golden Sour; Hop, Collaborate and Glisten; Gose in the Shell

IM: Honestly, the well is too deep for me to answer that succinctly. My favourites change every day. Part of the fun is in the exploration so I suggest getting out there and hitting your local breweries for a beer and a giggle.

I did see one recently by Stone Brewing called Neapolitan Dynamite which was an imperial stout brewed with chocolate, vanilla, strawberries and coffee. The name suits the beer.

Do you have any pet peeves when it comes to beer names or think there are things it is best to avoid?

WI: There is always one jerk who doesn’t like it.

BC: The best comedy speaks to power, and the worst (seemingly the most common) is about keeping the less empowered in their place. Names should not use race, gender, sexual orientation or disabilities as a punchline.

I used to laugh at and even repeat these kinds of jokes but, as I've grown up, I've come to realise how damaging it can be, and now make a real effort to avoid it.

IM: Don’t overthink it. NEVER overthink it. If you giggle longer at one that the other and it makes you think, while equally representing the core of the beer, then go with it. I may have just over thought that.

Do you have any advice for other brewers/homebrewers about coming up with a good name?

WI: Get your crew together and talk utter shit over two to three beers and it will organically appear. Any more and, usually goes downhill. After the name is achieved, celebrate with more beer, forget by the morning, rinse, repeat.

BC: In my case, it's just a matter of practise; puns come quite naturally to me now, as I've been professionally brewing and naming beers for some 13 years. If I hear an unusual word in normal conversation, I'm automatically rolling the sound around in my head, searching for other words with a similar sound. It's something of a curse.

IM: Focus not on the name but the beer in itself young Padawan. Beer comes first it does.

About the author: Judd Owen is a former zygote and Brisbanite who spends entirely too much time thinking about beer. He also runs the 14th best MS Paint based beer blog in the country: Brewed, Crude and Bitter. Margaret River has long been home to a good number of brewing companies; these days it must be the most populous of any region of Australia. One of the longest established is Cowaramup, which marks a decade since opening today. read on