Among the winners in yesterday's Hottest 100 Aussie Craft Beers of 2015 countdown were three breweries new to the list in 2015. Pirate Life and Hawkers Beer both launched in 2015, exploding out of the blocks with great beers and plenty of it to go around (albeit not enough as both have expanded significantly already and have more tanks coming.

Meanwhile, Big Shed Brewing Concern enjoyed a great second year: having registered nada in 2014, they stormed into the 2015 list with three entries, including their GABS entry, Golden Stout Time, at 16. We spoke to them all about their year just gone and where they're heading in 2016.

If you missed it yesterday, you can check out our full results article here and Infographic here.

Not bad for a brewery that only released its first beers on March 1, 2015: beers at three, four and 11 in the Hottest 100. Pirate Life Brewing was launched by Michael, his son Jack and Jack's fellow brewer Red Proudfoot. The brewers met while working at BrewDog in Scotland and created three hop forward beers with which to announce Pirate Life to the world.

"We've been pretty pleased," says Michael. "We planned to be in every state by Christmas, which we've delivered, and we're happy with our distribution run. Our beers have been well received. We go for big, bold flavours and our packaging had a point of difference about it: very simple but a bit different."

He believes much of their success comes down to two decisions they made: deciding to base themselves in Adelaide with the benefits it brings for distribution to both coasts; and putting their beer into cans.

"It's allowed the boys, Jack and Red, to really focus on the brewery [away from their home state] and be able to enjoy being in a new town, to discover the small bars and restaurants and the great things that go on in Adelaide. And it makes a big difference being able to be in Melbourne in an hour [rather than flying from Perth].

"We're firm believers that cans get beer into punters' hands in the freshest possible way," he says. With 17 of the Hottest 100 available in cans – up from four in 2014 – it would seem they're not alone.

As for basing themselves in Adelaide, he says the granting of dozens of small bar licenses has opened up more opportunities for microbreweries to get their beer out too.

Since releasing their first beers, they've increased their capacity by 120 percent, buying three new large fermenters they'd forecast they would need in year three; four more tanks are on the way with the intention that they will be able to brew around the clock several days a week.

"There's a huge appetite for craft beer in Australia," says Michael. "The exciting thing I've seen is the number of terrific beers coming out of Australia. They are fresh and not months old. We say, 'Get out there and drink Australian.' There are 20 or 30 breweries making world class beers. You don't have to have a Sierra Nevada or a Stone that's three months old."

He says the priority for local brewers is to to grow the craft beer market "from four percent to eight to 12 to 16" and that there needs to be a focus on quality to ensure that can happen: "Every bad beer hinders the market a little bit."

As for the future for Pirate Life, there are more collaborations planned, including a continuation of their partnership with the Hilltop Hoods. The beer they brewed with them will be coming out in cans in time for the group's forthcoming tour. They're also set to release the first beer in what will be an ongoing series with Tomfoolery Wines: a black lager aged in Tempranillo barrels. Number two will be a saison that has spent time in Grenache barrels.

There will also be the launch of their fourth core beer, an IPA, while they plan to can their stout for winter and are working on an imperial red ale too. 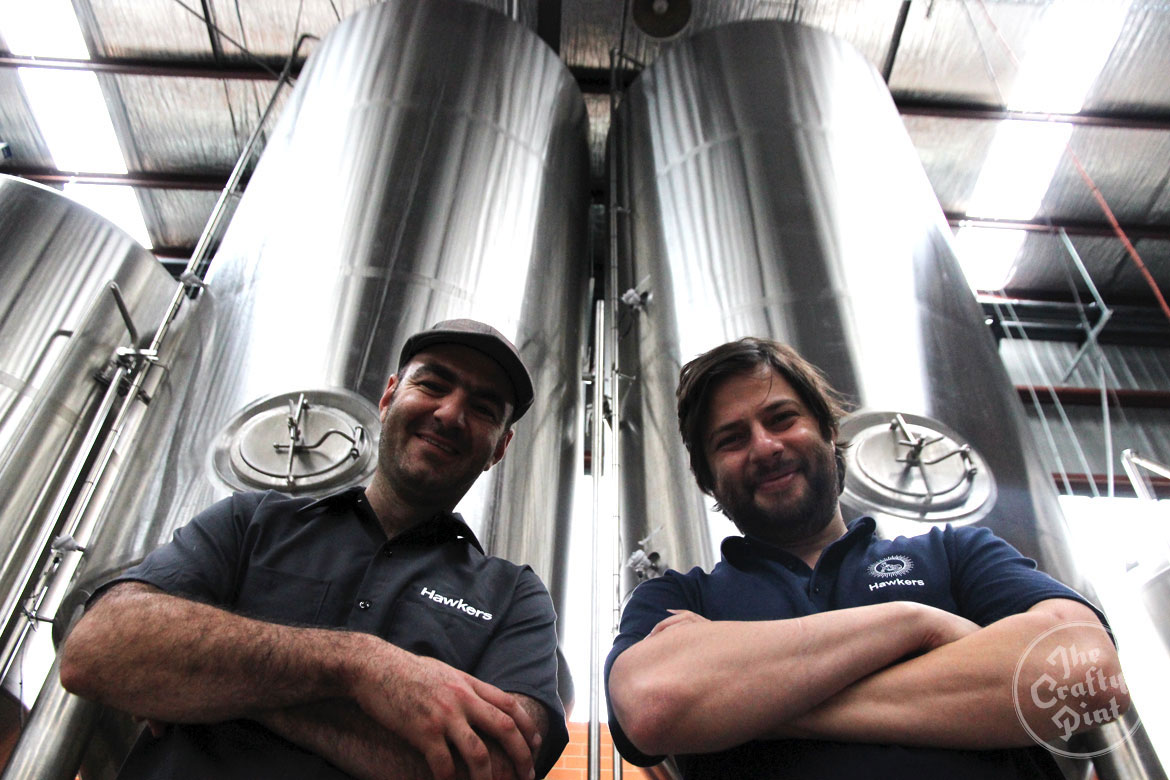 Hawkers launched with a bang in February, winning the People's Choice Award for their first beer, Pale Ale, two days later at the Great Australian Beer Festival. Despite opening with one of the largest brewery setups of any micro in Australia, upon which they also brew for a number of other brewing companies, they soon hit capacity and have been fighting to keep up with demand since.

Despite only supplying Melbourne for most of the year before starting to move into the Adelaide and Tasmanian markets, they've been faced with running out of all four of their beers – Pale, IPA, Pilsner and Saison – at different times. Already they've installed another 84,000 litres of tank space and have more fermenters on their way; according to Mazen (above right): "We're already 50 percent above the year five projections we had just for our beer."

"It's pretty cool," says Mazen, who founded 961 Beer, the Middle East's first microbrewery, before falling in love with Australia and moving here to open Hawkers with chef Joseph Abboud (above left).

"It's been a great year for us. The scary thing is we're already at 50 percent capacity for our brewhouse, which we had planned would last us for a long, long time. So we're already in discussions to get a second one [that] will be between 100 and 250 hectolitres."

As for their success, he says: "I knew there were enough people in the beer community that if you made a solid beer well then people would come.

"We launched with a pale ale, which is probably the most difficult beer to start with in Australia: it doesn't excite the beer geeks as it's another pale ale and it doesn't excite the regular beer drinkers because it's another pale ale. We always had the ability to do a lot more – [head brewer] Jon [Seltin] did some amazing barrel-aged stuff when he was at Bright. In fact, what's been disappointing was that we wanted to do more beers but we couldn't make enough of our normal beers.

"We started off with standard beers rather than gimmicky or extreme ones and wanted to make good beer, not craft beers or 'not craft' beers. Our mission was to get good beer everywhere and anywhere and put it into the hands of people who are drinking crap beer [as well as good beer]. Rather than get into the cycle of competing with brewers at the regular venues and target a limited number of bottleshops, we decided to try to convert new people into becoming beer geeks."

He hopes that their success in opening the eyes of store and venue owners who previously wouldn't have been approached by microbreweries will make it easy for other small breweries to follow.

"It's healthy. It helps us break out of our regular cycle; we don't all have to be in the same places," he says.

"The biggest problem right now is the size of the audience in Australia. We need to expand that audience." 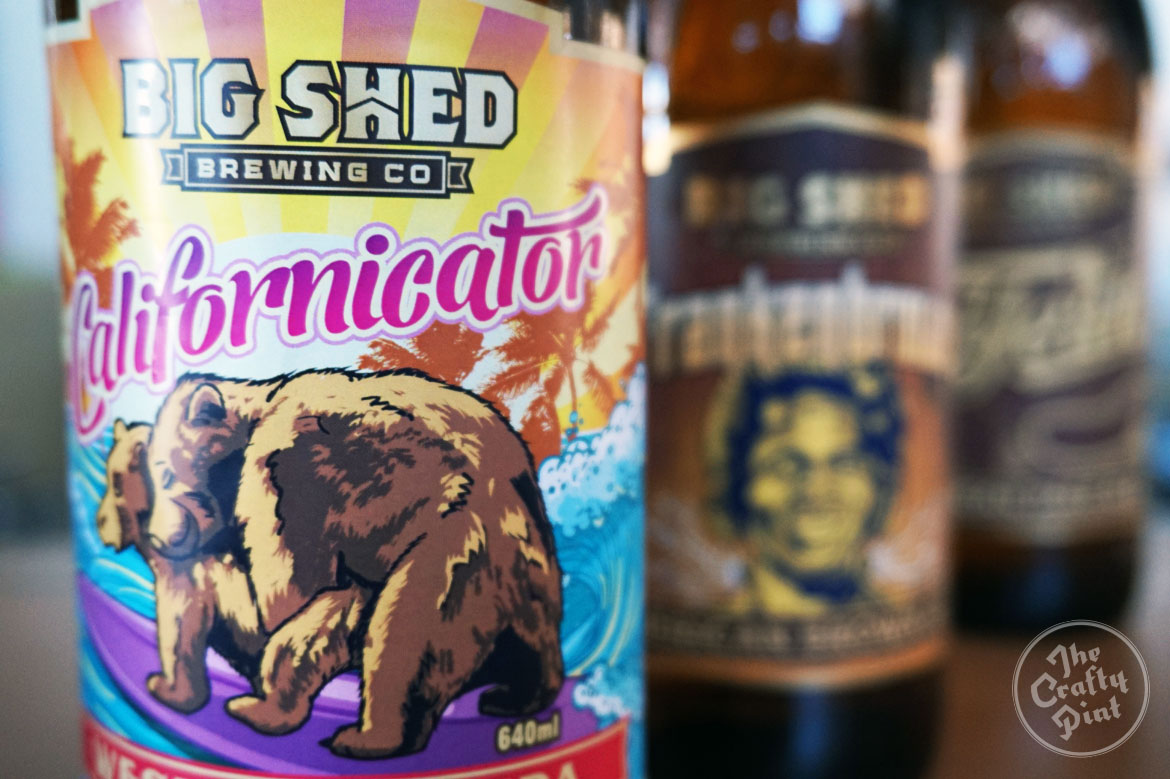 At the end of the first evening on which they opened their brewery to the public – with an offering that consisted of a single tap, a few bottled beers and some snacks – Craig Basford and Jason Harris had taken $200.

"We thought we were the kings, that our shit didn't stink," recalls Craig. "We thought life couldn't get any better."

Late last year, for their second birthday, having erected a six tap bar in the brewery, added a kitchen, opened up more space and (for the occasion) obtained a special license allowing them to use the area outside their brewery shed, they had 300 guests in attendance.

"The vibe was amazing. It felt like people were coming to a mate's place to celebrate a mate's birthday – a real communal feel."

It's just one aspect of the growth of their business that has taken them by surprise. We were there for the tapping of the first beer Big Shed released commercially: an early version of FrankenBROWN that they knew wasn't ready but had to go on tap at The Wheaty as they'd committed to the date. The beer was rough around the edges and it's fair to say that "rough around the edges" could be applied to much of Craig and Jason's approach back then. They had their vision for a communal brewery in which others would rent brewery time and tank space and that was up and running, but they perhaps underestimated how far they could go so soon.

Their beers improved markedly over the first year or so and were then packaged in some of the most eye-catching and humorous labels in Australia, quickly finding an audience. Their GABS entry, Golden Stout Time, came close to taking the People's Choice, and yesterday they scored three beers in the Hottest 100.

Having initially packaged their beers in 640ml bottles, they now have them available in 330ml too and are establishing a fanbase in Sydney and Canberra, with distributors now on board or imminent in Victoria and WA. They're also installing their own bottling line so they no longer have to transport their beer in cubes to be bottled in Clare Valley.

"It's not just about making beer," says Craig, although with the majority of capacity at the significantly expanded Big Shed now dedicated to their own beers, rather than brewers renting tank space, there's plenty of that going on too.

"This year has been about getting the right people on the bus and being able to drive it. [With the new tanks] we thought, good, we'll be able to consolidate. But we can't keep up."

The year ahead will see them carry out more collaborations, with Prickly Moses, BrewCult and Exit Brewing in their sights

"I like to think that every batch we make we learn and improve. We've had really great feedback. Punters like what we they have from us and the beers are up there: we're making good beer now."

The discerning beer drinkers of Australia would seem too agree. We've featured some impressively keen beer lovers in our Beer Nuts series over the years, but never any quite like Jess and Locky. Marie Claire Jarratt got in touch with the couple who got engaged onstage at indie beer's biggest night. read on