Many of Australia's microbreweries are blessed with idyllic locations. But can any rival Matso's?

For a start, it's located in the otherworldly tropical paradise that is Broome. Then you've got the views across the turquoise waters of the bay, the heritage-listed, striking former Union Bank building that it calls home, the large verandah and a huge expanse of courtyard... Well, you get the message. And we haven't even got to the fact that in this permanently warm climate, it's got the best beers in town for slaking your thirst.

They're beers that reflect the location too, frequently fruity and often showcasing ingredients that the region is famed for. Perhaps best known is Matso's Ginger Beer, one that predates most on the market and offers plenty of bite, so much so you'll find it hard to believe it weighs in at just 3.5 percent ABV. Speaking of bite, they're not averse to throwing chilli into beer either, not to mention various other native ingredients when the mood takes them.

As for the business behind the beers, Matso's first opened as a brewpub and restaurant in 1997 – the brainchild of 12 investors based in Perth. When their venture didn't take off as planned, it opened the door for Martin and Kim Peirson-Jones, whose family had built 60 4.5-star self contained apartments across the road from the brewpub and restaurant, to step in. They set about restoring it and, in 2003, added the unique on-site brewery - unique because they were unable to alter the structure in any way so had to have it designed to fit the existing space – and tripled on-site production.

Soon, however, with the beers finding fans across Australia, they hit capacity again and started having their most popular beers brewed offsite. It was a move that, while the owners didn't know it at the time, would lead to arguably the biggest change in the business more than a decade later.

They enlisted Gage Roads to help them meet demand so, when the Palmyra-based operation decided to expand and bring new brands into the business in 2018, the first acquisition was Matso's – which you can read about here.

It means Matso's now comes under the Good Drinks banner, one that's likely to welcome more beer and beverage brands over time. At the same time, the Peirson-Jones family continues to operate the Broome venue under license, where the in-house brewer produces a mix of core range and brewpub exclusives and specials.

So, while the Good Drinks team looks to bring the likes of the Ginger, Mango and Chilli beers to the country, visitors to the restaurant will still find a diverse and rotating selection on tap to sample alongside a menu sprinkled with plenty of fresh fish and the odd curry dish. Hard Lemon. It’s brewed but it’s not beer. In fact, it’s one of the biggest commercial success stories of the past twenty years in the US and in the run into the Australian summer, Matso's has debuted what they'll hope could be a game changer for many drinkers. Hard Lemon’s reduced sugar, low gluten and vegan-friendly credentials provide far-reaching appeal, with a flavour profile that may surprise. You can read more about the style in our feature from early 2019 here. After rolling the… Read more
Pale Yellow 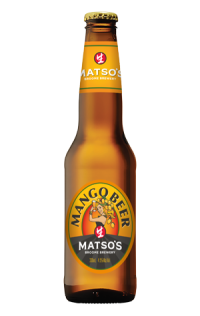 In these balmy, barmy days in the world of beer, where seemingly nothing is off limits for brewers and drinkers and "tropical" finds its way into the description of a huge number of beers, it kind of puts Matso's into a fresh perspective. Not only that, but with fruit being added to all manner of beers, from sours to IPAs, what was once seen as a quirky outlier in the Tropics feels rather closer to the pack in terms of the beers upon which it made its name. Of all of the beers to bear the… Read more
Golden Yellow 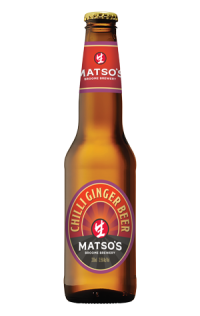 If you've sampled Matso's Ginger Beer, you'll be aware it packs plenty of punch for a beer at mid-strength weight (or any weight, for that matter). And, if you've tried their Chilli Beer, you'll be aware it steps things up a notch or three on the impact front, with the cayenne chillies hitting hard and fast and sticking around. Now imagine the two in tandem... That's essentially what you have here, a beer that could easily see the unprepared knocked sideways by chilli aromas as intense as the straight… Read more
Golden Matso's Ginger Beer has been a staple of the Broome brewery's lineup for many a moon, predating most such beers produced in Australia today and packing plenty of oomph on the flavour and aroma front while keeping booze content at mid-strength levels. Indeed, the initial hit is so pungent you might be taken aback by a beer that looks like a cloudy witbier with a rusty tinge in the glass. There's something a little herbal keeping the lively ginger and syrupy sweetness company on the nose, while the… Read more
Pale Yellow 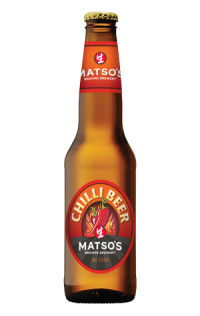 An ambush in beer form lies in wait for any drinkers approaching their first Matso's Chilli Beer unawares. Pop it in a glass, give it a swirl and bring it to your nose and you might surmise you've got an easy-going amber or a malty English ale in front of you. Maybe you'll pick up a faint chilli perfume, maybe not. There's no mistaking what you've got in your hands once it hits your lips however... BOOM! The heat derived from cayenne chilli speeds through the olfactory system all the way to your… Read more
Rich Brown