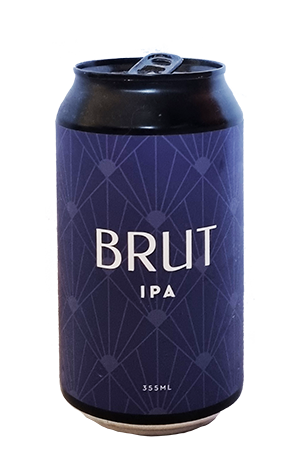 Back in 2018, well before any of us had any idea about a novel coronavirus, there was quite a bit of excitement in both the local and international beer world about the arrival of a new IPA. Brut IPAs were designed to be incredibly dry hoppy offerings, made with an amylase enzyme for that drying purpose and with hte name borrowed from the world of champagne. While there was a bit of excitement at the time, the style never quite took off to become as popular as hazies and soon faded like tears in the rain (or an old VHS recording of Blade Runner). Looking to see their return are Burnley Brewing and the ingredients suppliers at Bintani who together worked on this Brut IPA using DA-16; a yeast-enzyme hybrid from Fermentis. The plan was for the beer to be served at 2021’s BrewCon too but with that event cancelled, it’s been launched by the brewery in tins for August.

It’s not just that hybrid yeast that gives an indication this Brut IPA may be quite dry or lean either but its colour too, with the inclusion of corn and rice in the malt beer ensuring the sparkling and clear beer pour what's an incredibly pale straw. Such a lean and dry base lets the varied hop combination of Nelson Sauvin, Hallertau Tradition, Cascade and Sitiva bring big floral notes, candied citrus, peach and nectarine to beer with a biting bitterness. Will this mark the beer's widespread return? We can't say but what we can say is it's a beer ready for the warm weather of spring, or to be served on the Sunshine Coast during a brewers' conference.