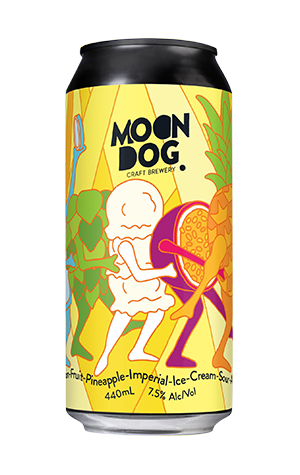 If there’s one dance move you should probably not do anywhere right now - well, at least on the East Coast of Australia, Darwin, or New Zealand - it’s a conga line. It's just not the kind of dance that's conducive to social distancing and, furthermore, is it even something people do outside of weddings on long-finished sitcoms? Fortunately, Moon Dog's Conga Lines can be enjoyed from the comfort and safety of your own home, with the "Passion-Fruit-Pineapple-Imperial-Ice-Cream-Sour-Ale" a fruit-laden, tart but sweet, 7.5 percent ABV beer ready to create a party – and that's just from the imagery on the can.

The pineapple and passionfruit combine like they've been squeezed directly into the glass and sit atop a soft layer of cream, which brings the beer awfully close to pavlova territory (as if such a dessert could be awful). But those sweeter notes are joined by a level of sherbet that makes Conga Lines closer to a lolly and induces that same kind of party in your mouth. Even if it's a party for one, or a tiny conga line confined to those you live with.

Save With Moon Dog's Online Store