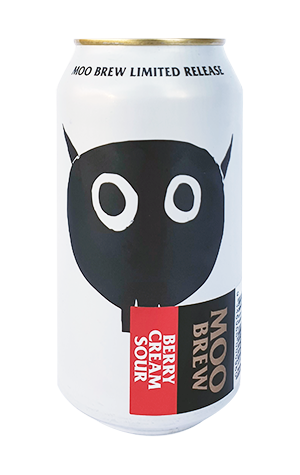 There’s a bit of a paradox to Moo Brew's Berry Cream Sour. On the one hand, it's not at all the kind of beer you would have likely seen the Tassie brewery make a few years back, not least as the most established of the state's indie brewers is newer to regular limited releases than most. But, on the other hand, having been released during Dark Mofo's Winter Feast, it does feel like the perfect way to finish a meal held during a pagan-inspired celebration of the Southern Hemisphere's coldest and shortest days. Even its bright red but pinkish hue is the kind of beer that fits a feast, or at least it's one that resembles the tomato remains left of Denethor’s face as Pippin sings a song of evil times for the Steward of Gondor.

Unsurprisingly, there aren't any tomatoes used in Berry Cream Sour – the dessert drop instead uses strawberries and raspberries to give it that beautiful colour. It's a fruited sour made with lactose too, which makes the beer a particularly thick, smoothie-like creation and, while it's mostly sweetness that leads the charge, the beer's soft tartness offers a balancing note, which in turn makes for its own delicious paradox too.