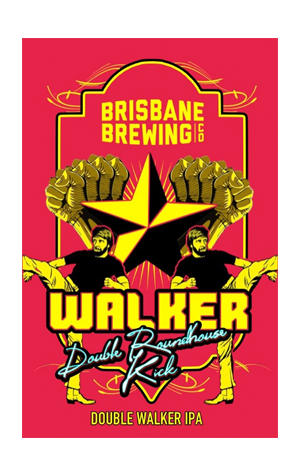 Brisbane stalwarts Brisbane Brewing Co celebrated a significant milestone this October, releasing the 500th beer brewed in their West End brewery in the shape Walker Double Roundhouse Kick, an imperial IPA that clocks in at a hefty 11.8 percent ABV. Fans of BBCo will recognise the Walker name from their award-winning Walker IPA, with the Double Roundhouse Kick taking everything the BBCo team love about Walker and the quintessential late 90s/early 00s, classic West Coast IPAs it's modelled after, and kicking it all up another gear.

The brewing team wanted to go big here in honour of the milestone, and Walker Double Roundhouse Kick is unashamedly the biggest beer ever brewed at their West End brewpub in terms of grain weight, and when you set aside barrel-aged and re-fermented beverages it's also the highest ABV beer they've produced.

The beer pours a beautiful amber and gives you immediate West Coast vibes with its aromas of citrus and florals and pine. Close your eyes as you sip and you'll be transported to the West Coast as well, as grapefruit-led citrus and mango and papaya-forward tropicals join a heady dose of pine and resin. There's a hefty malt backbone here to support all that hop weight, and it shines through at times in caramel fashion, while contributing to the the beer's full body and slick feel without hindering a bitterness that's long and lingering throughout.

The team describe it as "highly pintable" and they're not wrong - just don't forget that ABV if you decide to go big. As Head Brewer Ross Begbie's dad used to say, "everything in moderation, including moderation", so drop in and see the team at Brisbane Brewing Co and treat yourself to a Double Roundhouse Kick to the tastebuds before it's all gone!