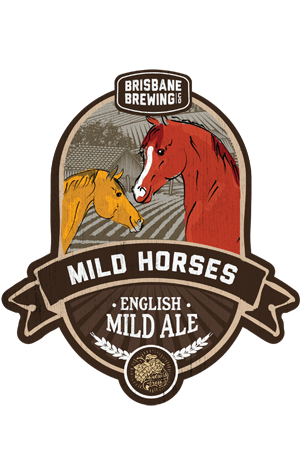 They've been keeping busy on the beer front at Brisbane Brewing Co. They recently hosted the launch of the third Band of Brewers collaboration (a Hemp and Corn Dubbel brewed with Newstead and Fortitude) and have a couple of new beers of their own hitting taps too. They make for quite the one-two punch as well: one a gentle, malt led, old school, English style mild, the other a heavy-hitting hop bomb.

The first to pour at the venue is the mild, going by the puntastic name Mild Horses. It's a sub-four percent ABV drop and one with which the brewer aimed for "fresh and easy going drinkability". He did this by adding a little bit of brown sugar "for tradition's sake" and keeping carbonation lower as with traditional English ales (and "for slurpin’ purposes" apparently). We're told to expect "a mellow roasted chocolatey flavour, with toasty biscuity notes and a hint of caramel" plus a touch of fruitiness from the English yeast.