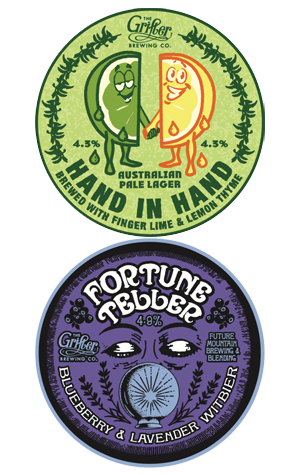 Many of us, when we were kids, were constantly berated by our parents: “Don’t play with your food!” or “Stop putting things in your drink!” Apparently the brewers at Grifter were never discouraged from doing this. Or maybe they were, but their rebellious natures just proved too strong. Either way, the Grifter crew have got a couple more offerings that are the result of experimenting with putting things in their drink.

Hand in Hand is about as Aussie as it gets - a pale lager, that classic style that Aussie drinkers have been turning to for generations, with the addition of Australian natives finger lime, lemon myrtle, and pepper berry leaf. While it mostly just drinks as a super clean lager with a fluffy white head, the lemon myrtle and lime do come through in the background (don’t ask me what pepper berry leaf tastes like though). Consider these Australian bush foods a hat tip to the purpose behind the beer - Grifter brewed it in the wake of the bushfires to raise funds for WIRES, donating 100 percent of sales proceeds from Hand in Hand through February.

In contrast to the downright bloody Straya-ness of Hand in Hand, Fortune Teller brings together an old Belgian beer style, a fruit originating in North America, and a flower that carries imagery of the English countryside. Grifter collaborated with Melbourne’s Future Mountain Brewing & Blending to make a witbier infused with blueberry and lavender: a purple, fruity and floral beer that wouldn’t have even been recognised as a beer in Australia a decade or two ago (and still may not be recognisable to the average Aussie punter). Between Ian from Future Mountain’s passion for traditional Euro styles and the Grifter team’s aforementioned experience with adjunct ingredients, the brewers have created a delicate balance between the flavours - the sweetness of the blueberries lays just enough foundation to carry the soft perfume of the lavender, giving the right amount of complement to the bready, slightly spicy character of the witbier.