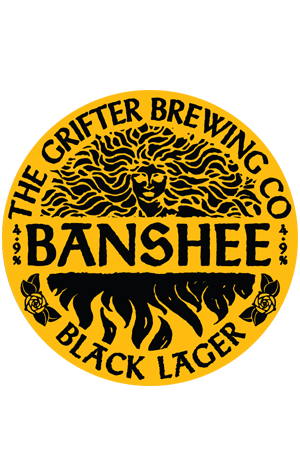 Part of growing up is letting go. That’s something the Grifter brewers have been grappling with lately as their brewery becomes a busier place. For almost five years (yes, it’s been that long…) all the recipes for Grifter beers have been created with a fastidious eye by the founding brewers. But, with more balls to juggle, it was inevitable they would want to give themselves a little leeway every now and then by allowing one of the apprentices to else to take control of a beer, from recipe development through to naming. That time is now, the brewer is Adam Wolfe and the beer is Banshee.

Taking inspiration from some personal favourites in his native USA, Adam opted to try and win his bosses’ enduring trust with a dark lager. In his mind the recipe would lead to something very dark, robust and full of chocolate character. But while malt would be the hero, the beer, he said, ought to maintain cleanliness and drinkability by dialling back on the roastiness so as to ensure the finish stayed smooth. So how’d he go? Well, in lieu of being able to track down the Banshee for a taste, you can look at two indicators. The first is that they set pretty high standards for the beer that comes out of the Marrickville brewery. The second is that the beer has been released for public consumption and Adam has continued to be allowed back into the brewery to brew more beer. You'd have to say that’s a good sign.