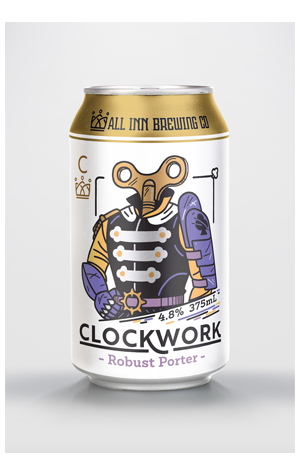 When a beer is dark, and sits at an alcohol level Australians would traditionally describe as “heavy”, it seems oxymoronic to describe it as “light”. But when comparing it to some of the belters out there, which may sit at seven percent or seventeen percent ABV, I feel it’s still an apt description in context.

While it bears many of the hallmark flavours of a heavier stout, Clockwork Robust Porter is relatively light in body and dry in finish, making it easier to drink than many of its cousins. It sits in the realm of either entry level dark beer or easy-drinking dark beer.

But even though it’s easy, it’s far from simplistic; the inclusion of seven different malts provides a pleasant complexity. The first sip opens up deep and roasty, before allowing in chocolate and wood, a lick of smoke and a whiff of coffee, before easing off into a cola-like flavour minus the sweetness.