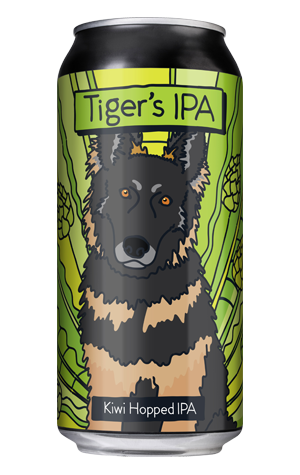 A spot of serendipity for the team at Moon Dog. Their Doggo IPA series celebrates dogs owned by various members of their staff and one of them just happens to have a dog called Tiger, perfect timing as the Tigers set out to try and claim a second AFL flag in three seasons. The beer was launched at the brewery as Richmond achieved a turnaround victory over Geelong and is in stores in time for Tigers fans to stock up before they run out against the Giants.

The beer itself is an all Kiwi hop affair, yet don't go into it thinking you'll be hit by some of the more potent diesel / gooseberry characters you can find in some hops from across The Ditch. The aroma doesn't explode from the glass, but instead serves up a deeper, more rounded hop character – stone fruit, pot pourri, paw paw, apricot, sweet melon. In part, the relatively subdued nature of the hops is down to a creamy, biscuity malt character that acts like a blanket. Or a lid, just like the one Tigers fans might be reaching for to contain their excitement in the lead up to their big day out.