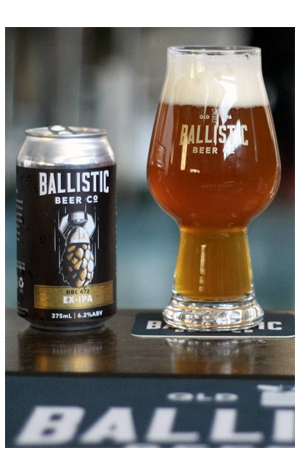 Hot on the heels of telling the world they're to start work on a third venue, Brisbane’s Ballistic have another new – and experimental – release hitting taps and fridges. It's one that could be said to encapsulate much of what's helped them enjoy such a successful start to life too, one that's been based upon a solid core range, a delightful series of single hop IPAs and their unique oaked ale beers. Because here you have a beer that combines elements of those in a unique, slightly odd, but very palatable beer.

The Ex-IPA is experimental in that it uses a single US hop variety: HBC 472, so called as it’s yet to be named or become part of Yakima Chief Hops' full commercial offering. The hops provide vanilla and oak characters reminiscent of a bourbon barrel-aged brew, as well as subtle tropical fruit and floral notes that balance the beer and keep it grounded in the realm of IPAs with which we’re more familiar.

This beer showcases that hop profile perfectly, resulting in a beer that's neither too sweet nor too bitter and familiar yet exotic. The Ex-IPA is something different, and it works.

And good beer outlets where you find Ballistic beers