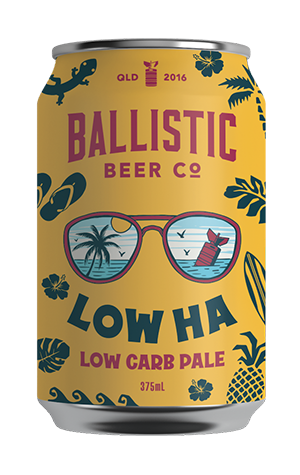 Do not drink this beer as marathon prep. It only contains 2.2g of carbs.

That means you’d have to drink five Low Has to get the same amount of carbs as in a full carb beer or a slice of white bread, or twenty-nine to get the same carbs as a large Macca's fries. And you should never drink twenty-nine beers in a sitting. That’s a terrible idea for so many reasons.

Honestly, you probably wouldn’t want to buy more than 24 of these at a time and even then you’d want to share them around. A couple of these will have you chilling in a deck chair - which, again, is simply awful preparation for a marathon.

You’ll just have to come to terms that this super clear beer, with its clean mountain water refreshment, fluffy fizz, and grainy bitterness will not stand you in good stead for a 42km run. It’s too manageable. The hoppiness isn’t extreme enough to drive those wiry legs of yours along the track, but it’s distracting enough that you’ll be daydreaming about it when you should be focused on the finish line.

If you need some energy to keep you going on your run, try eating some actual pineapple and passionfruit instead of this fruity impostor - at least they’ll bring some real carbohydrates instead of this piddly 2.2g. Or stuff a few servings of Macca's fries down your gob. That’ll win you the gold better this golden low-carb sideliner.*

*Note: This writer is not a sports nutritionist, and cannot guarantee that gorging on McDonald's fries will help you win a medal for marathon running. Having said that, the end of the Olympics does seem like the perfect time for armchair critics to shine.