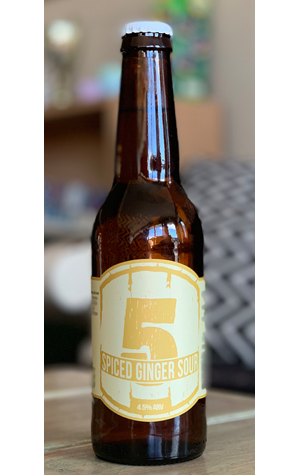 A food processor was the quiet hero behind this beer. Brewer Phil O’Shea put 20kg into the 350 litre batch - all of which had to be chopped up by the food processor first. But, says Phil, he’s had to tackle more difficult ingredients before.

“The ginger wasn’t too bad,” he says. “It was easier than some of the other things we’ve done. Shucking oysters was worse and zesting lemons was worse again."

Cardamom and tea leaves (for some earthiness) were also chucked into the beer, which was made with a view to go a different way with sours rather than just adding fruit. He's been experimenting with that sort of thing at the brewery bar and the one keg he made of the spiced ginger sour was so popular it made its way into bottles.

The presence of the ginger really balances out the sourness of the beer. Combined with the carbonation, it calls to mind the ginger beer of childhood, even though there’s actually no real sweetness here. Phil actually brewed 700 litres of sour beer, splitting off 350 for the spiced ginger release. This means he has 350 more litres to experiment with new flavourings over the brewery bar. So stay tuned.